Vilhelm Hammershøi married Ida Ilsted (1869-1949), the younger sister of his associate and friend Peter Ilsted, in 1891. Soon after their marriage Hammershøi and his wife travelled to Paris. They left Denmark on 5 September 1891 and arrived in Paris on 21 September 1891, travelling via Holland and Belgium. On his arrival, Hammershøi visited Théodore Duret, a leading French art critic whom he had met in Copenhagen in 1890. Duret, who had an active interest in Hammershøi’s work, was instrumental in introducing it to the influential Paris-based art dealer Durand-Ruel. On Duret’s initiative Hammershøi’s Portrait of Ida was sent to Durand-Ruel after an exhibition in Munich in 1891.[1]

During his Parisian sojourn Hammershøi executed two oil paintings.[2] One was a copy after an ancient Greek relief in the Louvre[3] and the other a Double Portrait of the Artist and his Wife[4] executed in 1892 (Fig. 1). The present Self-Portrait is almost certainly a preliminary study for the double portrait. A further preparatory drawing for the double portrait, in pencil and also executed in 1891, is now in a private collection (Fig. 2). This preparatory drawing may have served as preparatory to a Self-Portrait[5] painted in 1891 (Fig 4).

As in many of his earlier self-portraits, physiognomic perfection was not Hammershøi’s chief concern. His interest lay in depicting his own introspective and almost absent gaze.[6] In addition to the present drawing and the two double portraits (Figs. 1 and 2), only four other self-portraits of the artist's early period are known (Figs. 3, 4, 5 and 6). 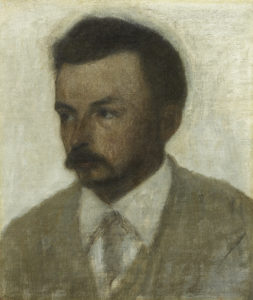