Vilhelm Hammershøi is best known for his interiors but they were not the only focus of his artistic interest. He also produced landscapes, architectural studies and a great many portraits in the course of his career. His wife, members of his family and his friends regularly sat for him and his output of self-portraits was prolific. I am loath to be the kind of portrait painter who has complete strangers coming to him to order their portraits, that is not what interests me; what I prefer is to know them well in order to paint them.[2]

The majority of Hammershøi’s self-portraits were painted at the beginning and the end of his career.[3] They movingly document a continuing process of meticulous self-examination and powerfully convey the heightened introspection that runs through his entire oeuvre. In his earliest self-portraits,[4] executed as a student at the Copenhagen Academy of Art in the 1880s, he favoured a frontal pose. In the following decade he experimented with a variety of perspectival approaches. In the space of just a few years he was to produce a self-portrait with his wife (Fig. 1),[5] three self-portraits (Figs. 2-4)[6] and the present self-portrait of 1895. A preparatory study, smaller in format and executed in pencil and chalk (Fig. 5)[7] is now in the collection of the Fondation Custodia in Paris. 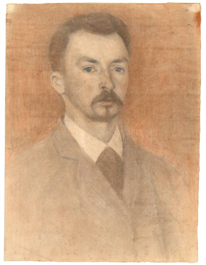 Hammershøi portrays himself in three-quarter view against a neutral background. His head is turned to the left, his contemplative gaze directed into the distance. The background, clothing and hair are rapidly, almost summarily indicated in a reduced palette while the artist’s attention focuses on the precise rendering of facial detail. Here the soft, muted tone[8] of the contrasting browns and greys is more richly applied and worked up. The 31-year-old appears somewhat maturer and seems more vulnerable and melancholic as compared with his earlier self-portraits.

Hammershøi entered the Copenhagen Academy of Art in 1879 and completed his studies in 1885. His first exhibited painting was a portrait of a girl. This was shown at the Academy’s Charlottenborg Spring Exhibition in 1885. A painting titled Bedroom was turned down by the jury of the Academy in 1890. After that, he exhibited with the artists’ association known as Frie Udstilling [‘Free Exhibition’] set up by the Danish artist Johan Rohde. Hammershøi married Ida Ilsted (1869-1949), the younger sister of his associate and friend Peter Ilsted, in 1891. Ida was his model in a great many of his paintings of interiors. The couple travelled extensively in Europe. In 1895, the year in which the present self-portrait was executed, Hammershøi exhibited with the Freie Vereinigung Münchner Künstler at the Kunst-Salon Gurlitt in Berlin. In the same year he completed a portrait titled Three Young Women. The models were his sister Anna, his wife Ida and his sister-in-law Ingeborg Ilsted.

The influential Berlin-based art dealer Paul Cassirer purchased several of Hammershøi’s paintings in 1905 and staged a one-man show of his work at the Hamburg branch of his gallery. Hammershøi exhibited at the World’s Fair in Paris in 1889 and again in 1900. He showed at the Venice Biennale in 1903 and at numerous exhibitions in Germany, England, Russia and the United States. In the year of his death the contents of his studio were dispersed at auction. His oeuvre lapsed into obscurity and was only rediscovered in the 1970s as art-historical re-evaluation of Symbolism emerged.[9] Exhibitions in Europe and Japan followed, the most recent being the major retrospective staged in Munich in 2012. Hammershøi is today regarded as the leading Danish artist of the second half of the nineteenth century.

[1] In 1909 Hammershøi and his wife moved from Strandgade 30, where they had lived for eleven years, to Strandgade 25, the former seat of the Danish Asian Trade Association. [2] Vilhelm Hammershøi, exhib. cat., Hamburg, Hamburger Kunsthalle, 2003, p.135. [3] In his late self-portraits of 1911 Hammershøi depicts himself as a painter with easel and brush. He executed his last self-portrait in 1914, the year in which he was diagnosed with throat cancer.

[7] Self-Portrait, 1895, pencil and chalk on paper, 24 x 18 cm, Fondation Custodia, Paris. See De Abildgaard à̀ Hammershøi: 75 dessins danois, exhib. cat., Paris, Fondation Custodia, Paris 2007, p.40. [8] Why do I use such a reduced, delicate palette? I really do not know. It is really rather impossible for me to say anything on the subject. It comes quite naturally to me but I cannot say why. In any case, it has been that way since I first started exhibiting. The colours can probably best be described as neutral and reduced colours. I am utterly convinced that a painting achieves its best effect in a colouristic sense the fewer colours it has. Interview 1907, published in Vilhelm Hammershøi, Hamburg, op. cit., p.135. [9] See Vilhelm Hammershøi, Hamburg, op. cit., p.127.