Portrait of the Sculptor Tobias Weiss, 1866

Sehen ist alles! – an assertion entirely characteristic of everything Wilhelm Leibl painted. Leibl was one of the nineteenth century’s outstanding portraitists. He was born in Cologne and in 1863 moved to Munich – then one of Europe’s leading artistic centres - to study at the Munich Academy. He quickly distanced himself from traditional teaching and academic conventions to focus instead on the Old Masters, in particular Van Dyck, Ostade and Rembrandt. At the same time, he familiarized himself with contemporary developments in Belgian and French painting. Visiting Paris in 1869-70, he immersed himself in the art of Courbet and Manet, whose paintings he had first encountered at the 'Erste Internationale Kunstausstellung' in the Munich Glaspalast in the summer of 1869. Their work was to have a formative influence on his painting. Returning to Munich in 1870, he intensified his interest in the direct observation of nature and began to focus on the countryside of Upper Bavaria. He shared this approach with a group of artists and friends – later known as the artists of the Leibl circle. Its members included Karl Schuch, Wilhelm Trübner, Johann Sperl and Hans Thoma. Although only loosely associated, the group was motivated by strong feelings of solidarity and friendly cooperation. They saw in the Realism of Courbet a powerful endorsement of their own artistic convictions – far removed from the florid weightiness of contemporary historicist painting.

The human face is the defining leitmotif of Leibl’s oeuvre. A ‘painter’s painter’, his work was always highly valued by other artists, and still is today. His portraits combine outstanding painterly skill and deep emotional intensity.[1]

The sitter is the Nuremberg sculptor and painter Tobias Weiss (1840-1929). Weiss came from a family of shepherds. He began life in poverty and half-orphaned but was taken in by a foster family who provided him with an education and an apprenticeship in the family business. His foster father was an ivory carver and woodturner. Weiss later enrolled at the Kunstgewerbeschule in Nuremberg and embarked on a versatile career as a painter and sculptor. Many of his commissions were for religious buildings. He spent the years 1865-7 in Munich, where this portrait was executed. He returned to Nuremberg and spent the rest of his life as a professor at the Baugewerbeschule.

Leibl depicts the twenty-six-year-old Weiss in a relaxed, frontal pose before a dark background. The dark tone of his clothing melds with the background, providing a vibrant contrast to the pale tones of his head and hand. The high forehead is given particular emphasis – Weiss[2] was described by his contemporaries as ‛exceptionally intelligent’. The layered execution of the skin is modulated in fine gradations of tone. Weiss’s eyes are directed away from the viewer. His expression is somewhat reserved, mixing expectancy and apprehension but still highly focused. The mouth is delicately defined and assertive. The elegant angle of the hand seems slightly staged as it rests against his chest in the folds of the loosely draped coat. A glowing cigar is nonchalantly placed between his fingers but the index finger appears to be signalling future promise. 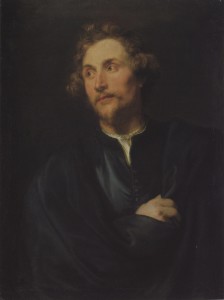 The style of pose, the expression of the eyes and especially the emphasis on the position of the right hand strongly suggest that Leibl is directly referencing a portrait by a seventeenth-century master – Anthony van Dyck’s important Portrait of the Sculptor Georg Petel (Fig. 1) painted in 1627-8. The painting is in the collection of the Alte Pinakothek in Munich. The parallels are unlikely to be coincidental – Leibl was a regular visitor to the Munich museums where he studied the Old Masters and made copies of their work. A sketch of the Van Dyck portrait of Petel is present in one of his sketchbooks.[3] Thus Leibl positions Weiss in the tradition of the great German Baroque sculptor. He also positions himself as following in the footsteps of one of the great portraitists of art history.