A Summer Landscape seen from the Interior of Vester Egede Church, Denmark, c.1832

Martinus Rørbye ranks as a leading representative of the Danish “golden age”, an era which marked the apex of Danish painting and flourished at the same time as German Romanticism. Significant cross-fertilization of ideas occurred between the Copenhagen Academy and the two key centers of Romantic thought in Germany, namely the Hamburg and Dresden Academies. Rørbye entered the Royal Danish Academy of Fine Arts in Copenhagen in 1819, studying under Christian August Lorentzen (1749–1828). In 1825 he joined the class of Christoffer Wilhelm Eckersberg (1783–1853) and became his private pupil. He was known as an inveterate traveler, exploring Norway, touring extensively in Germany, France and Italy and traveling as far east as Greece and Turkey. He finally returned to Copenhagen in 1841.[1]

Martinus Rørbye visited his wife Rose’s family at Christianslund and went on to the village of Vester Egede in July 1832.[2] During the trip he executed a number of landscape studies. They include views of Vester Egede Church and Gisselfeld Park.

In the present exquisite and intricately composed view the eye is led from the shadowy interior of a church through a porch into the open air. Rørbye demonstrates masterly skill in handling the play of contrasts and subtle light transitions, doubtless achieved through intense observation of nature. A warm glow radiates from the reddish brickwork of the floor and illuminates the whitewashed cross vaulting of the porch, which is framed by a dark outline formed by the inner wall of the church. The arched inner opening creates an interplay with the smaller outer doorway. Light enters the porch from the exterior, touching the diminutive seated figure of a white-haired beggar and illuminating part of the floor. But a diagonal form – a tombstone seen from the side, propped against a smaller, upright stone – interrupts the slender view of the sunlit summer landscape. Behind is a line of red-tiled graveyard wall. The dark outline of a chimneyed roof, perhaps the parson’s house, forms a horizontal bar across the landscape where it vanishes into the horizon. 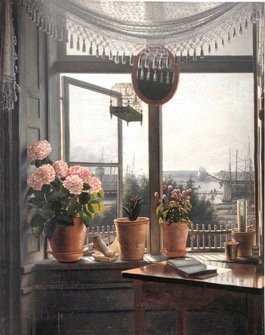 The image clearly holds a deeper symbolic meaning. The view from the interior into the external world, connecting the inner world of the self with the outer world of nature, was one of the central preoccupations of Romantic art, seen in the iconic window views of the Dresden Romantics. “In it the Romantics found a potent symbol for the experience of standing on the threshold between an interior and the outside world. The juxtaposition of the close familiarity of a room and the uncertain, often idealized vision of what lies beyond was immediately recognized as a metaphor for unfulfilled yearning.”[3]

The present painting once belonged to a Miss J. F. Ipsen, who also owned another important work by Rørbye – View from the Artist’s Window (Fig. 1).[4] Dated 1825, the work is an outstanding example of Danish painting of the “golden age”. Both works were exhibited together in Copenhagen in 1905.[5]