The Neapolitan Coast in Morning Twilight

This small plein-air landscape not only depicts the natural beauty of Italy but also testifies to the cultural exchange and dialogue that took place in nineteenth-century Europe. It was executed by the Danish painter Thorald Læssøe, who received his training during an extremely prolific period of painting known as the Danish Golden Age. Like many of his fellow painters, he traveled to Rome to join the international crowd of artists studying and exchanging ideas in the Eternal City. The Danes generally made a beeline for the studio of the highly successful sculptor Bertel Thorvaldsen, one of the key figures in Roman society.

Painting landscape en plein-air grew increasingly popular among artists in Rome from the beginning of the nineteenth century onwards. Before leaving for Rome, Læssøe had had the privilege of working in the Copenhagen studio of the famous painter Christen Købke, where he certainly had the opportunity to study the plein-air sketches Købke had made on his tour of Italy. 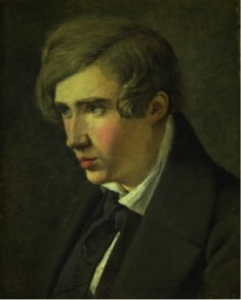 The present work does not depict an obvious highlight of the Grand Tour, but it does reveal Læssøe’s interest in atmosphere. The clever composition focuses on an immense sky largely filled with dark clouds and more distant white clouds. The clouds are reflected in the water, where their contours blur. The hills seem a uniform gray against the early morning twilight.

Thorald Læssøe was on very good terms with the Danish landscape painters of his generation, such as Peter Christian Skovgaard, Lorenz Frøhlich and Johan Thomas Lundbye. They painted together frequently and sometimes portrayed one another (see fig. 1). The present painting was very likely a gift from Læssøe to Lorenz Frøhlich, in whose family it remained until his great-granddaughter sold it in 2004.