Thomas Fearnley had first encountered Johan Christian Dahl on a trip to Norway in 1826 and they had struck up a friendship. In early 1829, Fearnley visited him in Dresden where he had been living intermittently since 1818. At the time, Dresden was a city of major cultural importance and home to such leading exponents of Romantic painting as C. D. Friedrich and Dahl. Under Dahl’s instruction the twenty-seven-year-old Fearnley deepened his landscape skills, completing numerous oil sketches after motifs that he found in Dresden and on his trips into the surrounding countryside.1 He adopted Dahl’s clear palette and free handling of paint, quickly developing a remarkable virtuosity in his own oil studies from nature.

The present work is a highly-finished preliminary study for a large-format painting titled View of the River Elbe (Fig. 1)2 completed in 1830. The painting was commissioned by Count Gustaf Trolle-Bonde (1773-1855),3 an avid collector who lived in Säfstaholm Castle in central Sweden surrounded by Old Master paintings and works by Nordic artists. View of the River Elbe was displayed in the castle as a pendant to Dahl’s Shipwreck off the Norwegian Coast (Fig. 2), which was also completed in 1830 and is today in the Billedgalleri in Bergen.4

Beyond Dresden the river Elbe winds its way north-east forming a number of islets. The small island depicted in the present oil is almost certainly Gauernitz Island situated fifteen kilometers from Dresden. A lone sailing boat is glimpsed on the water. Churches and houses dot the horizon. The dense upper foliage of deciduous trees on the slopes of the Elbe fills the right foreground. In the final version, the foreground vegetation – treetops dexterously sketched in a spectrum of soft green tones in loosely applied, layered strokes – was replaced by an unobtrusive genre element – a shepherd and his dog resting by the wayside. In contrast to the final version the present study displays a fluidity of touch and pronounced interest in the effects of light that can only be the result of direct observation sur le motif. 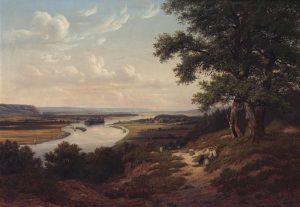 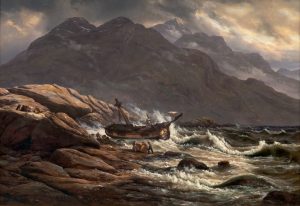