The present interior by the Danish painter Vilhelm Hammershøi was executed on an extended stay at a country house called ‘Spurveskjul’ in 1911. Hammershøi and his wife Ida had rented the house – situated to the north of Copenhagen – for the summer. The name ‘Spurveskjul’ [Sparrow’s Nest] can be traced back to its first occupant, the painter Nicolai Abildgaard – teacher of Philipp Otto Runge and Caspar David Friedrich. The property was built for Abildgaard in 1805-6 after his own design. Hammershøi selected his private living quarters very carefully – he changed address frequently – and furnished their interiors with meticulous regard to their relevance to his artistic work. They served as a repertoire of models for almost all his paintings. Alfred Bramsen, co-author of the Hammershøi Catalogue Raisonné, describes the couple’s stay at ‘Spurveskjul’ as a happy one, to the extent that they may even have considered purchasing the property.[1]

The painting depicts one particular room in the house – a room which Hammershøi used as a recurrent motif (Fig. 1). In the present version the room is devoid of furniture and fixtures. The only vestige of interior decoration is the hint of a curtain. Hammershøi directs his entire attention towards the space itself, as daylight gently invades the room, modelling the walls, doors and window in delicate gradations of grey. Reflections in the window panes block out the exterior, the viewer is left isolated in a solitary, secluded space.

A newspaper interview Hammershøi gave in 1907 throws light on his intentions: What makes me choose a motif is as much the lines in it, what I would call the architectural stance of the picture. And then the light, of course. It is naturally also very important, but the lines are almost what I am most taken by. Colour is of secondary importance, I suppose; I am not indifferent to how it looks in colour. I work very hard to make it harmonious. But when I choose a motif I think I mainly look at lines.[2]

Hammershøi’s brushwork is entirely characteristic of his late period and shares similarities with contemporary pointillist techniques.

The present composition served as preparatory to the background of the important self-portrait with a brush, titled Self-Portrait, ‘Spurveskjul’,[3] also executed in 1911. The work is now in the collection of the Statens Museum in Copenhagen (Fig. 2). 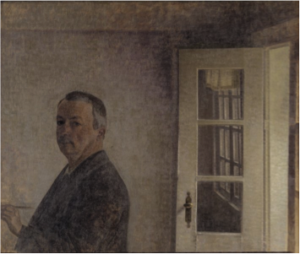 Hammershøi entered the Copenhagen Academy of Art in 1879 and completed his studies in 1885. His first exhibited painting was a portrait of a girl. This was shown at the Academy’s Charlottenborg Spring Exhibition in 1885. A painting titled Bedroom was turned down by the jury of the Academy in 1890. After that, he exhibited with the artists’ association known as Frie Udstilling [‘Free Exhibition’] set up by the Danish artist Johan Rohde. Hammershøi married Ida Ilsted (1869-1949), the younger sister of his associate and friend Peter Ilsted, in 1891. Ida was his model in a great many of his paintings of interiors. The couple travelled extensively in Europe. In 1895, Hammershøi exhibited with the Freie Vereinigung Münchner Künstler at the Kunst-Salon Gurlitt in Berlin.

The influential Berlin-based art dealer Paul Cassirer (1871-1926) purchased several of Hammershøi’s paintings in 1905 and staged a solo show of his work at the Hamburg branch of his gallery. Hammershøi exhibited at the ‘Exposition Universelle’ in Paris in 1889 and again in 1900. He showed at the Venice Biennale in 1903 and at numerous exhibitions in Germany, England, Russia and the United States. After his death the contents of his studio were dispersed at an auction held on 30 October 1916. His œuvre lapsed into obscurity and was only rediscovered in the 1970s as art-historical re-evaluation of Symbolism emerged.[4] Exhibitions of his work in Europe and in Japan followed, the most recent being the major retrospective staged in Munich in 2012. Hammershøi is today regarded as the leading Danish painter of the second half of the nineteenth century.

[1] Bramsen and Michaelis, op. cit., p.72. [2] Vilhelm Hammershøi, exhib. cat., Hamburg, Kunsthalle, 22 March-29 June 2003, p.135. [3] Hammershøi depicts himself gazing out of the painting in a brief interruption from work. Self-portraits are frequent in his early and late work. In the very early self-portraits executed in the 1880s he chose a frontal view. In the 1890s he experimented with different viewpoints. [4] Vilhelm Hammershøi, op. cit., p.127. Hammershøi’s relationship to the Symbolist movement is ambivalent. His painting titled Artemis, exhibited with the Frie Udstilling association in 1894, has been described as ‘a key work in the history of Danish art’, symptomatic of ‘the breakthrough of the Symbolist aesthetic’. However it is unclear as to what extent Hammershøi identified himself with the Symbolists, particularly in view of his negative comments regarding a Symbolist exhibition he had visited in Paris (see Vilhelm Hammershøi, op. cit., p.14).