Soon after the outbreak of the French Revolution the painter Elisabeth Vigée Le Brun (1755-1842) fled France with her young daughter Julie. A highly fashionable portraitist of Ancien Régime society, up until then she had enjoyed privileged access to the court, patronized particularly by Queen Marie Antoinette. Her peregrinations led her first to Rome and later to Florence and Naples. She also worked in Vienna, St. Petersburg and Berlin before eventually returning to post-Revolutionary France.

Vigée Le Brun visited the famous waterfalls at Tivoli in the winter of 1789. She was accompanied by her husband, the painter and art dealer Jean-Baptiste Le Brun, their fourteen-year-old daughter Julie and Francois Ménageot, the director of the Académie Française in Rome. A further member of the group was Le Brun’s young protégé, the French painter Simon Denis. The present painting is based on a number of oil sketches made by Denis directly before the motif. In her diary Vigée Le Brun gives a detailed account of the excursion and mentions that Denis was a member of the party. This painting, executed only a few weeks later, in early 1790, provides his own record of the outing.

Nothing of the atmospheric subtlety and spontaneity of Denis’s plein-air sketches is lost in this finished painting which he hastened to complete with impressions of Tivoli fresh in his mind, on his return to Rome. Documenting the beginnings of plein-air painting in Italy, the painting is also important because it represents one of the most renowned women artists of the period, Elisabeth Vigée Le Brun, at work.[1]

Vigée Le Brun is seated under an olive tree, a sketchbook on her knees, working on a study of the waterfalls. At her side is Julie and a little further away the governess, Madame Charost. A black cloth or blanket is suspended in the lower branches of the tree to protect mother and daughter from the burning sun. Far below, the tiny figures of Ménageot and Le Brun converse on the river bank. The high volume of water bursting over the falls has caused the river to swell. Weeks of exceptionally heavy rainfall had delayed the trip to Tivoli.[2] Vigée Le Brun, enthralled by the resounding roar of the cascades, noted: ‘(...) From there, I heard the sound of the cascades, which so delightfully lulled me; for such a sound has nothing shrill about it, as do so many others I abhor. Not to mention the fearsome sound of thunder (...).[3] 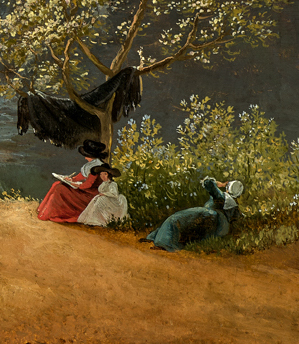 The present landscape is Denis’s earliest recorded representation[4] of the waterfalls at Tivoli. An oil sketch dated 1793 bears the inscription Cascarelles à Tioly il y avait peu d’eu, suggesting it was made at a time of low rainfall. The sketch is now housed in the Koninklijk Museum voor Schone Kunsten in Antwerp. A version titled Vue de la Villa de Mécène executed in 1795 is now held in the Musée de Grenoble. A fourth version of the subject was commissioned by Friedrich Graf von Reventlow for Schloss Emkendorf in Schleswig-Holstein in 1795. A further oil sketch very closely related to the present painting surfaced in a Christie’s auction in 2006 (Fig. 1).

Denis was born in Antwerp, where he trained under the landscape painter Henricus Josephus Antonissen before moving to Paris to further his studies. Here he came into contact with Jean-Baptiste Le Brun. With Le Brun’s patronage and encouragement Denis was able to settle in Rome in 1786. Only a year later an article praising his plein-air studies appeared in the art periodical Giornale per le belle arti. The article highlighted his ability to render effects of light and his convincing observation of natural detail.[5] Writing to Goethe in 1805, the German philosopher August von Schlegel lauded Denis as the most gifted landscape painter working in Rome.[6] Later in his career Denis moved to Naples and in 1806 succeeded Jakob Philipp Hackert as court painter.

Until the early 1980s little scholarly attention was paid to Denis’s oeuvre and his works were dismissed as examples of conventional early nineteenth-century landscape painting. This attitude, however, was to change dramatically when a large group of his plein-air oil sketches suddenly came to light. The discovery revealed him to be a central figure in the development of plein-air painting in Rome in the last decade of the eighteenth century. Ever since his rediscovery Denis has been prominently represented in all the major exhibitions focusing on this aspect of artistic practice. Dated 1790, this painting directly reflects all the exceptional qualities of early plein-air painting.