In these northern regions it is always the beauties of Nature that play the leading part while ‘Nature’s children’, human beings, must content themselves with a subordinate role.[1]

Peder Balke’s landscapes draw deep inspiration from the scenery of northern Norway which he first encountered on a visit to Finnmark and the North Cape in 1832.[2] This journey was of central importance to his artistic development. The landscape motifs he recorded at the time are recurrent themes in his later work. The bizarrely shaped granite peak of Stetind (Fig. 1)[3] would come to represent Balke’s metaphor for the dramatic character of landscape,[4] as did the cliffs of the North Cape. His aim in the present painting was not topographical accuracy. Rather, his objective was to convey the visual impact of the power and dramatic quality of the mountain and the fjord by original use of heightened proportions.[5] The tiny boats symbolize the insignificance of humans in the face of the grandeur of nature. Another version of the present oil is recorded.[6] 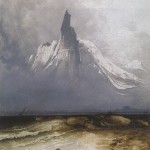 Thick impasto brush marks in white accentuate the motion of the waves and highlight the snowfields on the distant mountainside. Juxtaposed to this are areas of transparent brushwork where the surface of the paper is allowed to shine through.

Balke’s memoirs provide an entertaining account of the first half of his life. Coming from a humble background, he was obliged in his youth to work as a farm hand, hawker and journeyman painter to support his family. But in 1827 he was able to join the painting class at the Royal School of Drawing in Christiania. He developed an interest in landscape and began to make studies from nature on hiking trips in Norway. The absence of an art academy in Norway proved good reason to leave the country in 1828 and to enrol at the Stockholm Academy of Art. In 1830 Balke visited Copenhagen where the paintings of Johan Christian Dahl impressed him greatly. In the summers he continued to travel extensively in Norway and in 1832 embarked on his first journey to northern Norway. In 1835, he stayed in Dresden for several months with Dahl and Caspar David Friedrich.[7] He travelled on to Paris where he came into contact with the Norwegian landscapist Thomas Fearnley.

Back in Norway in the early 1840s, he began to produce the first of his major works, although public recognition was largely lacking. Commissions were in short supply and in 1844 he resolved to leave Norway for Paris. He managed to obtain an audience with King Louis-Philippe who was eager to meet him – he had visited the north of Norway as a young man after the Revolution. Balke showed him the oil sketches of northern Norway he had brought with him to Paris. Louis-Philippe, impressed by their quality, selected a group to be worked up as large-format paintings. Twenty-six of these sketches are preserved and are now on permanent exhibition at the Louvre. Balke’s future as an artist seemed secure, but events in the run-up to the 1848 Revolution intervened. The King was forced to abdicate and this important commission was never brought to fruition. In late 1847 Balke was compelled to leave Paris. He returned briefly to Dresden, but decided to travel to London in the spring of 1849. Here, he was able to study the work of JMW Turner. This influence was almost certainly a major contributing factor to the growing radical tendencies in Balke’s style.[8]

Balke settled in Norway permanently in 1850. He joined a socialist workers’ movement and took on a number of social and political commitments. He engaged in social projects and was involved in founding a community based on utopian ideals. Despite the persistant lack of public recognition, he continued to paint, producing the important body of work on which his reputation now rests.[9]

[2] Finnmark is a region in the extreme north-east of Norway and borders on Russia. This is Norway’s only border with Russia. Balke’s journey took him from Trondheim to Vardø and Vadsø in the extreme east, via the North Cape. See Paintings by Peder Balke, exhib. cat., London, National Gallery and Tromsø, Northern Norway Art Museum, London 2014, p. 64.

[5] Stetind was voted the National Mountain of Norway in 2002.

[7] In Dresden, Balke came under the influence of Friedrich and Dahl. Dahl was a fellow countryman and shared lodgings with Friedrich. Balke was drawn to Friedrich’s handling of nature and this was to have a lasting influence on his work. See Knut Ljøgodt, ‘In Quest of the Sublime: Peder Balke and the Romantic Discovery of the North’, in Paintings by Peder Balke, op. cit., p. 52.

[8] The first solo exhibition of Balke’s work in Britain is currently being staged by the National Gallery in London and runs from 14 November 2014 to 15 April 2015.