Professor Jens Rathke (1769-1855), a naturalist and early supporter of Peder Balke, encouraged the young artist to travel to central Norway in the summer of 1830. Balke started his journey by hiking through the county of Telemark and the Vestfjord valley in south-east Norway. It was here that he encountered the spectacular natural beauty of Mount Gausta and the Rjukan Falls [Rjukanfossen: lit. ‘the smoking waterfalls’]. He was later to describe the experience as sparking a profound interest in the wonders of the Norwegian landscape and the striking beauty that it displayed.[2] Unfortunately none of the sketches he made on the journey have survived. However the subjects – particularly Mount Gausta and the Falls – were to accompany him for a lifetime and are leitmotifs in his work. (For one of Balke’s earliest depictions of the Falls, see Fig. 1.)

Shortly before he set off on the trip to central Norway he visited Copenhagen where he had the opportunity to study the work of Johan Christian Dahl. His landscapes and depictions of the natural beauty of Norway were to leave a lasting impression on Balke. It is possible that he saw actually Dahl’s painting titled View of the Rjukan Falls (Fig. 2) on this visit. The painting is dated 1830. 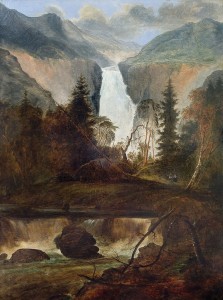 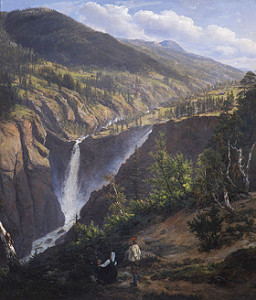 Although Balke’s work was barely acknowledged by his contemporaries he stuck to his determination to pursue an artistic career.[3] In the late 1850s he began to dispense with detail and to adopt highly unconventional techniques. He developed a preference for small formats in which he displayed an extraordinary degree of virtuosity. He favoured a wet-in-wet technique, painting on a white ground and often in grisaille. He avoided impasto, instead rubbing diluted paints onto the surface of the image with a brush, sponge or the tips of his fingers – as in the present painting where his fingerprints are clearly traceable. This process left the white ground partially visible. At times he would emphasize the ground, rather in the sense of conventional white heightening. He would stress the linearity of the main formal elements, using the white ground as a unifying component to lend the composition light and depth.[4]

Balke’s memoirs provide an entertaining account of the first half of his life. Coming from a humble background, he was obliged in his youth to work as a farm hand, hawker and journeyman painter to support his family. But in 1827 he was able to join the painting class at the Royal School of Drawing in Christiania. He developed an interest in landscape and began to make studies from nature on hiking trips in Norway. The absence of an art academy in Norway proved good reason to leave the country in 1828 and to enrol at the Stockholm Academy of Art. In the summers he continued to travel extensively in Norway and in 1832 embarked on his first journey to northern Norway. In 1835, he stayed in Dresden for several months with Dahl and Caspar David Friedrich.[5] He travelled on to Paris where he came into contact with the Norwegian landscapist Thomas Fearnley.

Back in Norway in the early 1840s, he began to produce the first of his major works, although public recognition was largely lacking. Commissions were in short supply and in 1844 he resolved to leave Norway for Paris. He managed to obtain an audience with King Louis-Philippe who was eager to meet him – he had visited the north of Norway as a young man after the Revolution. Balke showed him the oil sketches of northern Norway he had brought with him to Paris. Louis-Philippe, impressed by their quality, selected a group to be worked up as large-format paintings. Twenty-six of these sketches are preserved and are now on permanent exhibition at the Louvre. Balke’s future as an artist seemed secure, but events in the run-up to the 1848 Revolution intervened. The King was forced to abdicate and this important commission was never brought to fruition. In late 1847 Balke was compelled to leave Paris. He returned briefly to Dresden, but decided to travel to London in the spring of 1849. Here, he was able to study the work of JMW Turner. This influence was almost certainly a major contributing factor to the growing radical tendencies in Balke’s style.[6]

Balke settled in Norway permanently in 1850. He joined a socialist workers’ movement and took on a number of social and political commitments. He engaged in social projects and was involved in founding a community based on utopian ideals. Despite the persistent lack of public recognition, he continued to paint, producing the important body of work on which his reputation now rests.[7]

[1] Thekla was Balke’s youngest child. She was born in 1858. She married Alexander Lange (1857-1905) in Buenos Aires in 1889. She returned to Christiania on the death of her husband. [2] Cited after Paintings by Peder Balke, exhib. cat., London, National Gallery and Tromsø, Northern Norway Art Museum, London 2014, p. 14. [3] Marit Ingeborg Lange in P. Kvaerne and M. Malmanger (eds.), Un peintre norvégien au Louvre. Peder Balke (1804-1887) et son temps, Oslo, Instituttet for sammenlignende kulturforskning, 2006, p. 40f. [4] See Lange in op. cit., 2006, p. 51f and Dieter Buchhart and Anne-Brigitte Fonsmark (eds.), Peder Balke. Ein Pionier der Moderne, exhib. cat., Krems, Kunsthalle Krems and Copenhagen, Ordrupgaard, Heidelberg 2008, pp. 28-45. [5] In Dresden, Balke came under the influence of Friedrich and Dahl. Dahl was a fellow countryman and shared lodgings with Friedrich. Balke was drawn to Friedrich’s handling of nature and this was to have a lasting influence on his work. See Knut Ljøgodt, ‘In Quest of the Sublime: Peder Balke and the Romantic Discovery of the North’, in Paintings by Peder Balke, op. cit., 2014, p. 52.

[6] The first solo exhibition of Balke’s work in Britain was staged by the National Gallery in London and ran from 14 November 2014 to 15 April 2015.