The Danish artist Lorenz Frølich received his training as a painter from three luminaries of the Danish Golden Age: Martinus Rørbye, Christen Købke and Christoffer Wilhelm Eckersberg. From 1840 on, he spent most of the following three decades outside Denmark, but maintained his ties to Copenhagen through a lively exchange of letters with his friends Peter Christian Skovgaard and Johan Thomas Lundbye. In Munich and Dresden he was inspired by the Romantic artists Joseph von Führich, Ludwig Richter and Eduard Bendemann. He spent the period 1846-1851 in Italy. In 1852-1853 he worked in Thomas Couture’s studio in Paris, and became a friend of Edouard Manet and Edgar Degas. Only in 1874 did he settle permanently in Copenhagen, where he was elected an honorary member of the Academy in 1877 and appointed to a professorship in 1890.[1]

Frølich was also well known as a draughtsman, illustrator and etcher. For example, he was commissioned to illustrate Hans Christian Andersen’s Abenteuer (Adventures). Of particular importance in his oeuvre are his oil sketches, which he made throughout his life 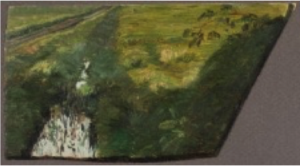 and sometimes gave away to friends. Our study depicts a typically Danish landscape of heathland, almost at sea level, criss-crossed by drainage ditches. Frølich endeavored to produce a detailed depiction of the grasses and aquatic plants and their mirror image in the water. A smaller sketch in the Skovgaard Museet (fig. 1), which was a gift to his above-mentioned friend Skovgaard, reveals Frølich’s intense engagement with the motif, the composition and the perspective.