Provenance:
Lotte Laserstein
Private collection, Sweden (by inheritance; according to the previous owner the work was acquired directly from the artist in the 1940s and has remained in family hands ever since)

We are grateful to Dr. Anna-Carola Krausse, Berlin, for her research findings and for her valuable assistance in compiling this catalogue entry.

In specialist publications, Lotte Lasterstein is today seen predominantly as a creator of monumental nudes. By the 1920s, there was nothing particularly exceptional about a woman artist addressing a subject that – because of the restricted training opportunities open to women artists – had traditionally been reserved for male artists. What still astounds the viewer today, however, is the immediacy of Laserstein’s work – the directness with which she depicted her models.[1] Modernism and the new visual language of photography and advertising made a considerable contribution in that respect. 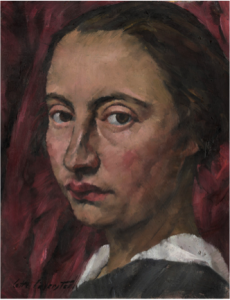 Laserstein’s nudes are carefully and systematically composed. She uses virtuoso brushwork to model the sensuous form of a woman viewed from the rear. The subject derives its aesthetic appeal from the tension between its sketch-like quality and its intensely detailed articulation. The torso is delicately worked with areas of transparent brushwork, which contrast with the expressive bravura of the background. Unusually large for an oil on paper, the work displays extraordinary technical dexterity and confidence. Laserstein began experimenting with the complexities associated with large-format oils on paper early in her career. After 1933, when she was increasingly ostracized because of her Jewish background and excluded from German artistic life, she had difficulty in obtaining artists’ materials and began to perfect her skills in the use of the medium.[2] The Laserstein expert, Dr. Anna-Carola Krausse, dates the present oil to the early 1930s. The technical virtuosity of the work shows Laserstein at the height of her creative powers.[3]

Born in Prussia, Lotte Laserstein was a Berlin-based Neue Sachlichkeit painter. As an independently minded woman of Jewish descent in a male-dominated art world, she failed to comply with conventional norms on a number of counts. It is therefore particularly remarkable that she was one of the first women to be admitted to the Berlin Academy of Art in 1921 – going on to win the Academy’s gold medal in 1925. Her ‘preoccupation with the portrayal of people’[4] had emerged very early in her career and the teaching of Erich Wolfsfeld (1885-1956) at the Berlin Academy of Art served to strengthen it. Her allegiance to nineteenth-century realism was profound – through Wolfsfeld she encountered the paintings of German realists such as Wilhelm Leibl. In her final two years at the Academy she advanced to become Wolfsfeld’s Meisterschülerin and remained loyal to his teaching. By then she had a studio to work in and a good supply of models and painting materials. In 1925 she was to meet Traute Rose, who would be her close friend and favourite model. In 1927 Laserstein established her own private school of painting.[5] However her financial situation remained precarious. Until the spring of 1934 her work was included in exhibitions held throughout Germany. Then she was driven out of public life. Forced to flee Germany in 1937 to escape Nazi persecution, she settled in Sweden, where she remained for the rest of her life. Like many other émigré artists of her generation, she never succeeded in regaining the international recognition she had once enjoyed in Berlin in the 1930s.

After Laserstein’s death her work was largely forgotten until a major exhibition mounted jointly at the London art dealers Thomas Agnew & Sons and the Belgrave Gallery in 1987 led to a rediscovery of her oeuvre. In 2003, the first comprehensive presentation of her work was staged at a retrospective in Berlin. Numerous exhibitions at museums and galleries followed. German museums now hold important examples of her work: the Nationalgalerie in Berlin has acquired Evening over Potsdam and the Städel in Frankfurt Russian Girl with Compact. The Lenbachhaus in Munich has showcased the recently rediscovered painting In the Restaurant. A number of major exhibitions due to be held in Germany in 2017 and 2018 will acquaint an ever-wider public with the life and work of this important painter of the interwar period.[6]

[5] Laserstein and Wolfsfeld remained in contact after she left the Academy. He occasionally supplied her with painting materials, particularly after the Nazis seized power in 1933. See Krausse, op. cit., p. 53, note 170.