Moon Rising over the Grunewaldsee, 1898

Lesser Ury is perhaps best known for his depictions of fashionable big city life - Berlin cafe scenes by night, clubs and variety shows – and particularly for his virtuoso rendering of street lights and car headlights reflected on the city’s busy, rain-swept streets. But his repertoire of subjects was in fact far richer and more complex than this, and landscape motifs, drawn mainly from the countryside surrounding Berlin, occupy a key position in his oeuvre. In this he was to prove receptive to contemporary symbolist influences. He had taken up landscape painting as early as 1882, first as a student of Jean-Francois Portaels at the Académie Royale des Beaux-Arts in Brussels and later under Jules Joseph Lefèbvre[1] in Paris, and it would remain a lifelong interest. His restless travels in the 1890s gave him exposure to a wide range of contemporary artistic tendencies, particularly Symbolism in Italy and France.

He sought out the quiet of the natural world, finding a respite from city life and an important source of inspiration in the beauty of the Brandenburg countryside. Elusive effects of light and changing weather conditions appealed to him as much as the diffuse effects of natural light at different times of the day. This provides an interesting parallel to his urban landscapes which at first glance appear so very different. He had a penchant for the transitional properties of light at dawn and at dusk. The present Landscape by Moonlight – Moon Rising over the Grunewaldsee catches this suspended moment. The full moon projects its gleam on the surface of the water. The shadowy forms of trees and bushes fill the foreground and their contours and foliage seem to dissolve. Blues and greens dominate the palette and their tonal transitions have a soft fluidity. Even dark areas initially perceived as black turn out to be richly colored. Ury’s skillful handling of natural effects and his focus on the play of light and atmospheric effects[2] rather than on naturalistic representation produces intense, powerful imagery, recalling Corot in his late landscapes. Adolf Donath commented on this quality in 1921: What is magical about Ury’s landscapes is that we find landscape’s inner voice in them.[3]

Ury was one of three leading Impressionists working in Berlin, the others being Max Liebermann and Lovis Corinth.[4] But he also engaged with symbolist ideas, as his landscapes so clearly demonstrate. The existentialist philosopher Martin Buber, writing in 1903, noted: Ury’s landscapes are so distanced from content, so visually powerful and so appealing to the eye and the emotions that they hardly admit of discussion.[5]

Looking back on his career, Ury noted in 1921: Life was not pleasant for me, art was not easy and the critics were harsh […]. In retrospect, he felt that his life and career had not run smoothly. He was a pronounced individualist – both in his life and his art – and led a solitary existence. While Liebermann, Corinth and Slevogt regularly met and exchanged ideas, Ury chose to remain an outsider. He found little justification in the fact that his three contemporaries were always more favorably reviewed. He openly criticized Liebermann for pirating the technique he had developed to depict the effects of light. Liebermann, however, had the press on his side and emerged from the dispute the winner.[6] This damaged Ury’s reputation and the negative repercussions undermined his fragile mental state. But although he had to fight to win recognition in his early career, by 1910 he was a successful and recognized painter. By then, reviews had become less abrasive and his work had begun to attract the interest of collectors. When Corinth replaced Liebermann as president of the Berlin Secession in 1915, Liebermann could no longer block Ury’s participation at the popular Secessionist exhibitions. This, too, was to increase awareness of Ury’s work. He was given honorary membership of the Berlin Secession in 1921. A special exhibition was staged by the Secession to mark his sixtieth birthday in 1922. His paintings are at times filled with the sense of anonymity and alienation associated with life in a big modern city.

The present landscape remained in Ury’s possession up to his death. The last photograph of Ury in his studio – published in the magazine Der Querschnitt a year after his death – shows him seated beside the painting (Fig. 1). Records show that the work was at some point acquired by the collector Heinrich Grünewald who emigrated from Berlin to Tel Aviv. He was a personal friend of the prominent art historian Dr. Karl Schwarz, the first director of the Jewish Museum in Berlin. On 24 January 1933, only months after the museum’s opening, Schwarz was forced to flee the country. In the summer of 1933 he was invited to be the Tel Aviv Museum’s artistic director and its chief curator. Schwarz was a profound connoisseur of Ury’s work and had been a close friend. In 1961, he was asked to curate a memorial exhibition in Berlin to celebrate the centenary of Ury’s birth. Lenders to the exhibition included Heinrich Grünewald, who also loaned the present painting. 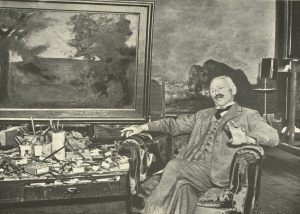 Fig. 1 Lesser Ury in his studio, on the easel the painting Moon Rising over the Grunewaldsee. Photograph published in Der Querschnitt, 12/5, May 1932

[4] Lesser Ury was born on 7 November 1861 in Birnbaum. His family was Jewish and came from the province of Posen, then in Prussia. He grew up in considerable material hardship. He broke off a tradesman’s apprenticeship to train as a painter and studied in Düsseldorf, Brussels and Paris. He travelled widely to hone his artistic skills and was in Belgium, France, Italy and Switzerland. He moved into a studio-home on Nollendorfplatz in Berlin in 1901. He was to live and work here for the rest of his life. Initially, critics rejected his work and it was slow to achieve recognition. He enjoyed the support of Adolph Menzel, the writer Adolph Donath and the patronage of Carl Schapira, a leading collector. He exhibited regularly but did not participate at the Secessionist exhibitions in Berlin until 1915. He was given honorary membership of the Berlin Secession in 1921 to mark his sixtieth birthday. He is reputed to have ‘consistently pursued his own course, unaffected and undeterred by contemporary fashion, a true example to his fellow artists.’ He died on 18 October 1931 and is buried in the Jewish cemetery in Berlin-Weissensee. His estate sale was managed by the Berlin auction house Paul Cassirer. (For a chronology, see Schlögl and Schwarz, op. cit., 1995, pp. 108-9; and Schlögel, in Schlögl and Winzen, op. cit., 2014, pp. 33-52).