Leopold Carl Müller[1] is the leading Austrian Orientalist painter. The whole of his œuvre –landscapes, genre scenes and portraits – displays a preoccupation with Mediterranean light. He began his training under Karl von Blaas and Christian Ruben at the Vienna Academy of Fine Arts. He visited Venice in 1857 and was also in Hungary. He produced drawings for Figaro, a Viennese satirical magazine. He travelled to Paris in 1867 to visit the ‘Exposition Universelle’. Here, he encountered the work of Eugène Fromentin and began to develop an interest in Orientalist motifs. He shared a studio with August von Pettenkofen, a friend and fellow painter, in Venice in the winter of 1870-71. Thereafter, his artistic interest tended to centre on three cities – Venice, Vienna and Cairo. 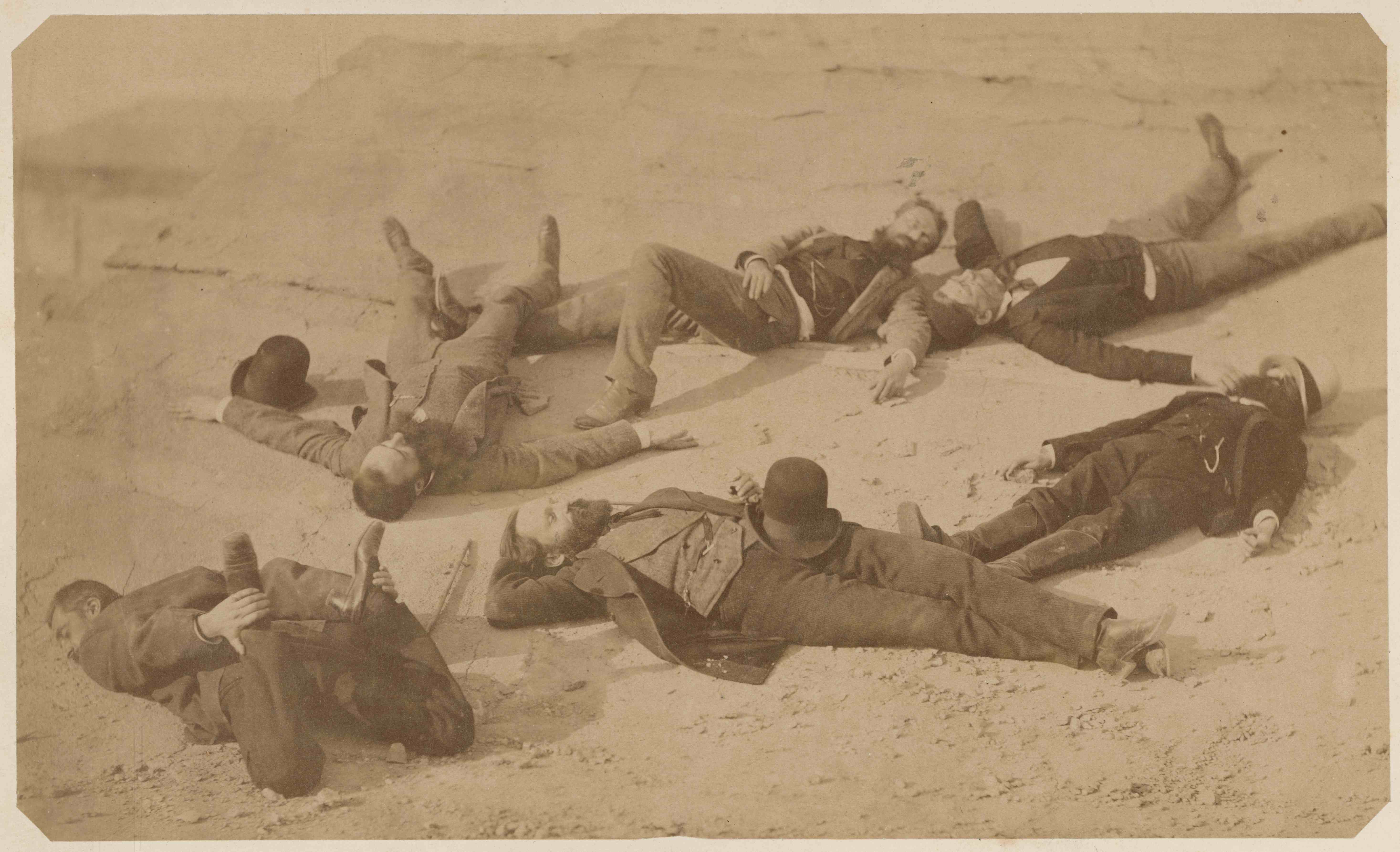 Müller first visited Egypt in 1873. He spent the winter of 1875-6 in Cairo with his fellow artists Carl Rudolf Huber, Franz Lenbach and Hans Makart. Other members of Müller’s party were Count Karol Lanckoronski, a Viennese art collector, and Georg Ebers,[2] an Egyptologist. The six found accommodation in a spacious but run-down building known as the Mussafir Chan. Its picturesque qualities were ideally suited to the group’s Bohemian lifestyle and appeared to meet their idealized expectations of the exotic world of the Middle East. A contemporary Viennese newspaper columnist noted: They [the artists] called the Mussafir Chan the ‘madhouse’, and what went on inside was indeed crazed behaviour […]. The photographic machine was in continual use.[3] The painters photographed each other (Fig. 1), and local women, in unusual poses. And they also took photographs of Egyptian everyday life which would serve as models for later paintings. In Cairo, Müller was to meet Edward, Prince of Wales and the English art dealer Henry Wallis. Wallis was to be responsible for the sale of a large number of Müller’s paintings to London collectors. Müller first travelled to London in 1875 and then visited the city regularly. Between 1873 and 1886 he was in Egypt as many as nine times, usually staying for extended periods and usually in the winter months. He was a popular figure in Viennese Academy circles. He was appointed professor at the Academy in 1877 and elevated to the post of rector in 1890-91.

In the present oil sketch Müller uses the motif of a group of simple houses near the village of Banha to convey his perception of an authentic Egyptian hamlet. Staffage elements are excluded. The palette is dominated by shades of finely modulated brown. Müller employs a similar palette and similar tonal gradations in a painting very probably executed at about the same time. Titled The Village of Mâtârije,[4] it is now in the collection of the Österreichische Galerie Belvedere in Vienna.

Banha, the capital of the Qalyubia Governorate in the Nile Delta region of Lower Egypt, was built on the site of the ancient city of Athribis. It lies some fifty kilometres from Cairo. In the nineteenth century the city was a popular tourist destination for visitors to Egypt.[5] It was easily reached by rail as it lay directly on the Alexandria to Cairo line constructed in 1856.[6]