Dr. Anne Adriaens-Pannier will include the drawing in her forthcoming catalogue raisonné of Spilliaert’s work.

We are grateful to Anne Adriaens-Pannier for her research findings.

The present drawing is an autonomous work by Léon Spilliaert, signed and dated 1913. No sketches or preparatory drawings for these smaller works are known. He was a masterly, strikingly original draftsman, working chiefly on paper. His repertoire of motifs included still-lifes of bottles, flowers, plants and shells in addition to the larger-format interiors, seascapes, harbor views and self-portraits for which he is better known. A drawing titled Arums, also dated Avril 1913 and executed in the same technique, is closely related to the present flower motif (Fig. 1). 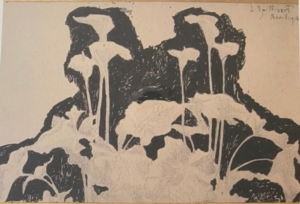 The common link between Léon Spilliaert, James Ensor (1860-1949) and Fernand Khnopff (1858-1921) is their rich creative imagination. A tendency towards reclusiveness and melancholic introspection is also something these three Belgian Symbolists have in common. Spilliaert’s only formal training was at the Académie des Beaux-Arts in Bruges between 1899 and 1900. After a period of just a few months at the Académie, he decided to strike out on an independent career. On a visit to the Paris World’s Fair in 1900 he saw work by Gustav Klimt and first discovered the paintings of leading Symbolists such as Jan Toorop, Giovanni Segantini and Ferdinand Hodler.

In 1902, Spilliaert began to produce illustrations for Edmond Demon (1857-1918), an influential Brussels publisher and collector. It was through Demon that he discovered the work of Fernand Khnopff, Théo Van Rysselberghe, George Minne, Félicien Rops and James Ensor. He also came across the work of Odilon Redon and other contemporary French artists. Spilliaert spent a large part of the year 1904 in Paris where he struck up a friendship with the Belgian poet Émile Verhaeren, a key figure in the Symbolist movement. For a few years, before marrying and settling down to address motifs from the natural world, Spilliaert appeared tormented by solitude and hallucination. His restless, feverish temperament1 is reflected in his work. The much-admired series of monochrome self-portraits he made around 1907 are ruthlessly honest and surreally disturbing in equal measure.2

One of Spilliaert’s greatest strengths was his ability to develop a wide variety of themes without committing himself to one particular genre or style. His work is a symbiosis of expressionist and symbolist tendencies. He devoted himself intensively to his art, never ceasing to create remarkable visual imagery. His dramatic vision was strongly influenced by his study of Nietzsche and the writings of Stefan Zweig. His restless mind might explain why he preferred working in pencil, ink and watercolor rather than oils.