The Temple of Antoninus and Faustina - San Lorenzo in Miranda, Rome 1807-8

Lancelot-Théodore Turpin de Crissé[1] first visited Rome in the years 1807-8. The Comte de Choiseul-Gouffier (1752-1817), a French diplomat, academic and erudite scholar of Greek antiquity, funded his stay. By 1802, Turpin was working on engravings for the second volume of Choiseul-Gouffier’s Voyage pittoresque de la Grèce, which was published in 1809. Choiseul-Gouffier also commissioned one of Turpn’s most famous works, a large-format view of the Temple of Antoninus and Faustina. Painted in Rome in 1808, it was exhibited at the Paris Salon in the same year. This important early work is now in the collection of the Museum of Fine Arts in Boston (Fig. 1).[2] 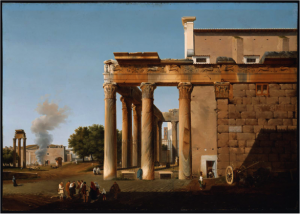 The present, recently discovered small-format oil is the first version of the Boston painting. Previously unknown, it represents a significant addition to de Turpin’s early oeuvre, as evidenced by the meticulous attention to architectural elements and precisely observed effects of light, coupled with the use of paper as a support. Paper, rather than canvas, was the painting surface of choice when making studies. Paper enables preparatory work to be done en plein-air, it is easier to handle, the drying process is faster.

The Temple of Antoninus and Faustina stands at the northern edge of the Roman Forum on the Via Sacra. In the Early Middle Ages it was converted into the Church of San Lorenzo in Miranda.

Very much a child of his time, Turpin directed his interest not towards the baroque façade of the church, but instead towards the classical temple with its magnificent, vividly grained marble columns and its entablature, decorated with an ornamental frieze of griffins arranged according to heraldic priority. A preparatory sketch of the subject is now in the collection of the Louvre (Paris, Musée du Louvre, inv. MI 692). The viewpoint Turpin has chosen does not show the baroque facade of the church. Between the columns is a glimpse of the tower of the Senatorial Palace, at the left are the three columns of the Temple of the Dioscuri, and what is probably the Basilica Julia. Whereas in the Boston painting the Campo Vaccino is peopled with figures and a team of oxen beside a cart, in the small-format preparatory painting Turpin’s main focus lies on the architecture. This he depicts with masterly skill and extraordinary attention to detail.

During his first stay in Rome Turpin lived and worked in the convent of Trinità dei Monti. He recorded the interior of his studio in a pencil study (Fig. 2). At the right, leaning against a wall, is the large-format version of The Temple of Antoninus and Faustina. Pinned to the wall above it are two rows of small-format works. Among them, almost discernible, may conceivably be the present small painting (Fig. 3). 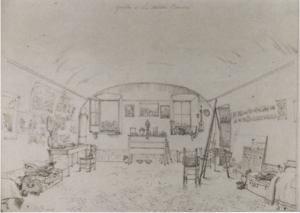 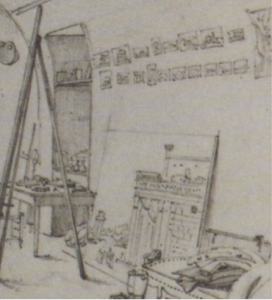 Turpin returned to France and in 1810 was appointed as chamberlain to Joséphine de Beauharnais. He remained in her service until her death in 1814. Napoleon granted him the title of Baron d’Empire in 1811. Further honours followed in quick succession: he was made an honorary member of the Académie Française in 1816, appointed to the Conseil des Musées Royaux in 1824, named Inspecteur Général des Beaux-Arts in 1825, and elected to the Légion d’Honneur in the same year. Public recognition brought him freedom and independence. He was a highly prolific artist, producing paintings, prints and drawings. He was also active as a writer. He traveled widely in search of motifs and visited Italy regularly. He formed a remarkable personal collection of antiquities and works of art testifying to his highly eclectic artistic sensibility. His collections are now housed in the Musée des Beaux-Arts d’Angers.