View across the Moat towards the Thomas School and the Thomas Church in Leipzig, 1817

When twenty-three-year-old Julius Schnorr von Carolsfeld set off from Vienna on June 1, 1817 to visit his family in his native Leipzig, six years of intensive study at the Vienna Academy of Art already lay behind him. In August 1817, he was to embark on an extended trip to Italy, traveling through southern Germany with Rome as his final destination.

The two months spent back in his home town reunited with his family would also have been a time of farewell for the young Schnorr von Carolsfeld. It was his final parting from the familiar places of his childhood before the start of the long journey to Italy. The works he produced during his stay convey a sense of nostalgia – a poignant example is the portrait now held in the Albertina in Vienna3 depicting his sister Henriette (1799-1820). She was to die three years later. The present drawing emits a similar air of nostalgia. It too was executed in July 1817 along with a companion sheet depicting the Pleissenburg,4 a historic building where Schnorr’s family lived and where his father, the painter Veit Hanns Schnorr von Carolsfeld, had his studio.

The present sheet depicts two youths seated on a grassy mound overlooking the renowned Thomasschule in Leipzig. At the foot of the mound is a glimpse of the city moat. The Thomasschule was founded in 1212 and is one of the oldest schools in the German-speaking world. Julius Schnorr von Carolsfeld was an alumnus of the school.
Adjacent to the school is the Thomaskirche, acclaimed for its boys’ choir, the Thomanerchor [St. Thomas Choir of Leipzig]. The choristers, known as ‘Thomaner’, were educated at the school. Johann Sebastian Bach served as cantor from 1723 to 1750.

The art historian Erhard Göpel, a longtime owner of this sheet, noted: The drawing depicts a view across the moat surrounding the city walls towards the Thomaskirche. The tall gable in front of the western end of the church roof is the gable of the old Thomasschule; at the time, the low row of houses set above the city wall was known as the ‘Schulgasse’, named after the ‘Neue Freyschule’, the building that extends into the image at the right edge of the sheet. The draughtsman’s viewpoint is to be found on Dittrichring near the junction of today’s Otto-Schill-Strasse, not far from the Pleissenburg, where the young artist’s family then lived [...].5

Schnorr’s drawing is a pictorial representation of the familiar sites of his youth and it is therefore only logical that the viewer should discover the artist’s own likeness in one of the two youths resting on the grassy mound (Figs. 1 and 2). 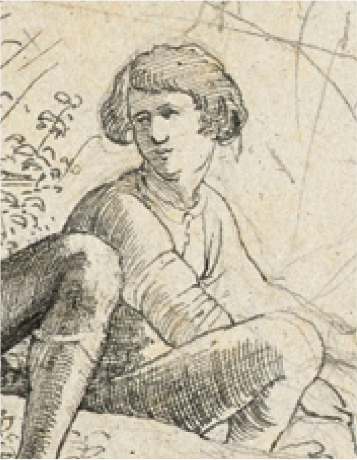 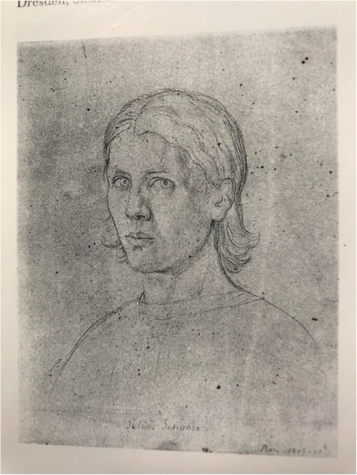 Schnorr left Leipzig on his journey south in August 1817. In Salzburg, he met up with the Olivier brothers, whom he knew from Vienna, and hiked with them in the Salzkammergut and the Berchtesgadener Land. On November 6 he finally set off for Italy, arriving in Rome in early 1818. Shortly after his arrival he joined the Brotherhood of St. Luke.6

This sheet has a distinguished ownership history. Its first owner was the prominent collector Eduard Cichorius (1819-1907), a member of a prosperous family of merchants in Leipzig. Cichorius began to assemble a collection of artworks in the mid 1850s and soon narrowed his interest to focus on German Romantic drawings. An avid collector, he also befriended a large number of artists. Among those artist friends with whom he was most closely connected were Ludwig Richter and Julius Schnorr von Carolsfeld. It has not been established whether Cichorius acquired the present sheet directly from the artist, although documentary evidence shows that Cichorius did purchase a number of early works from Schnorr. He was also acquainted with the next owner of the drawing,7 the artist’s grandson Professor Ludwig Schnorr von Carolsfeld, the curator of the Berlin State Museums. The sheet subsequently entered the possession of Carl Heumann (1886-1945), who built up a remarkable collection of German and Austrian drawings of the period 1750-1850. Heumann died in a bombing raid in Chemnitz in 1945 but his collection survived and was brought to West Germany by his family in the 1950s. A large part of the celebrated Heumann collection – this includes the present sheet – was sold at auction house Stuttgarter Kunstkabinett R. N. Ketterer on November 29, 1957.8 Erhard Göpel’s acquisition of the drawing was undoubtedly a matter of unique personal importance – he had already published it in 1933 and 1939.

Schnorr’s early work played a central role in the development of German Romanticism. His drawings of this period are extremely rare and highly sought after.9

9 Two early works by Schnorr, one executed in 1817 and the other in 1816, were sold at auction house Galerie Bassenge in Berlin in 2016 and 2014. Ein Zweig mit welken Blättern [Branch with Wilting Leaves] (1817, pen, ink and pencil on vellum), fetched in the region of 2 million euros and a Portrait of Friedrich Olivier at the Age of Twenty-Five (1816, pencil on paper) roughly 780,000 euros.