This portrait depicting a young brigantessa is a major work by Léopold Robert. Previously known in the literature but only recently discovered, it was executed in Rome in 1820. The genesis of the painting is fully documented in contemporary sources. The young woman depicted was the beautiful young bride of a brigante from the village of Sonnino who had abducted her. Clearly, the young Robert was not unaffected himself by her attractions: a beauty such as I had never seen.[2]

Briganti was the term used to describe Neapolitan rebels and outlaws during the Risorgimento, the 19th-century ideological and literary movement for national unification and freedom from foreign occupation that emerged in Italy with the end of Napoleonic rule. The briganti were a threat to public order but something of a tourist attraction for travellers on the Grand Tour. A number of briganti and brigantesse were to acquire almost legendary status (Fig. 1).

Serious incidents involving the briganti were a regular occurrence. The authorities reacted by taking punitive action. The young brigantessa depicted in the present painting was a native of Sonnino, a village between Rome and Naples, where a number of major incidents had occurred. In 1819, the authorities rounded up all fifty rebel families in the village and deported them to Rome. The village was razed to the ground. Women, children and the elderly were separated from the leaders and detained in a building opposite the Baths of Diocletian. The appearance of these mountain folk in their bright local costumes caused a considerable stir in Rome. They certainly had a strong visual impact on Robert, who quickly recognized their potential as a new artistic genre. He was to dedicate the months that followed to developing this and produced a large body of studies of the prisoners.[3] 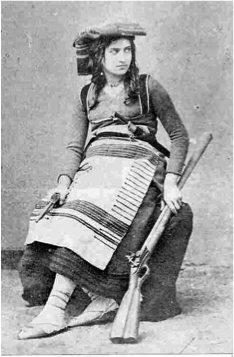 Robert, in a letter to his mother dated 14 August 1820, gives a detailed account of the genesis of the present painting: The governor of Rome granted me permission to enter a kind of prison where they are all incarcerated so that I might make studies. This I immediately did […] and I found […] the most picturesque of costumes and the most brilliant of colours. […] I began by making a few studies for myself […] and I made another, large study of a young girl with a magnificent visage, […] it is near a fountain, she is resting by her water carrier. All these works are still unfinished, I need to spend a month in the country in order to make detailed studies of the landscape […] I have a quantity of new subjects which will enable me to earn a lot of money.[4] Records show that Robert visited the Colli Albani in October and November of the year 1820 to make landscape studies and in search of motifs for the painting.

The various inventories and exhibition catalogues listing Robert’s paintings show that he made a number of portraits of women from Sonnino. However, all of these works are either smaller in format than the present painting, or are described as studies, or depict older women.[5] Only one listed work is a life-size version of a young girl en grand naturelle. This is known to have been sold in 1821 together with two other paintings by Robert, to a purchaser named Lord Kinnaird.[6] This was very probably Charles, eighth Lord Kinnaird (1780-1826), a collector and frequent traveller to Italy. It was he who built the family seat, Rossie Priory, in Perth, Scotland. Completed in 1817, the property housed Scotland’s leading private art collection up to 1948.[7] Charles almost certainly consulted his brother (Fig. 2), the Hon. Douglas Kinnaird (1788-1830), for advice on the purchase. Douglas Kinnaird – a friend of Lord Byron – is known to have been in Rome at the time.[8] 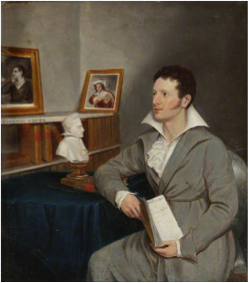 In literature, through Byron's work – and the writings of Victor Hugo (Hernani, 1830) – the brigante emerged as a new type of hero – a Romantic outcast, part brigand: […] lone, wild, and strange.[9]

The young brigantessa depicted in this painting is dressed in the traditional costume of Sonnino. This is characterized by the colour of the clothing, the shape of the coarsely woven headdress and the woollen apron (Fig. 3, top row, centre). Robert’s colouristic virtuosity and meticulous attention to detail lend the figure tactile qualities. The brigantessa with her magnificent visage is strikingly set against the deep blue of the sky. A classic view of the Campagna Romana serves as a background. The palette displays Robert’s fidelity to the French tradition in painting. 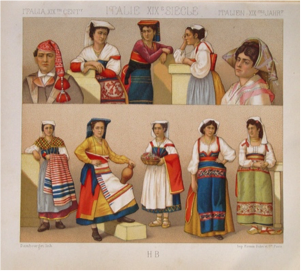 After training as an engraver, Robert entered the studio of Jacques-Louis David in 1811. When David was banished from France as a régicide in 1816 Robert returned to his native Switzerland. He visited Rome in 1818 and was in Naples in 1821 and 1825. In 1829, while travelling in northern Italy, he met members of the Bonaparte family. During a stay in Florence in 1831 he embarked on a brief liaison with Charlotte Bonaparte, daughter of Joseph Bonaparte, one-time King of Naples and Sicily. Robert settled in Venice in 1832 where he committed suicide in 1835. An exponent of French Romanticism, he is regarded as one of the leading Swiss painters of the early nineteenth century. His portraits of briganti and brigantesse were precursors of a Europe-wide wave of popularity for the genre from 1830 onwards.