Jean-Léon Gérôme is probably the best-known French nineteenth-century Orientalist. His travels included some twelve visits to the Middle and Far East. In 1867, he set out on the route of the classical Middle East Grand Tour – along the Nile to Cairo, the Fayoum Oasis and Abu Simbel, then back to Cairo, across the Sinai Peninsula and Wadi el Araba to the Holy Land, Jerusalem and, finally, Damascus. 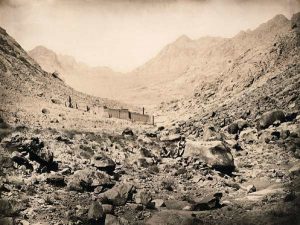 These journeys were a considerable undertaking and involved large numbers of camels and horses, a team of bearers and an interpreter. Friends usually joined the party to defray the costs, so in the winter of 1867-8 Gérôme was accompanied by seven and at times, eight companions. Six were artists, one was a writer, and one a photographer – his brother-in-law Albert Goupil (Fig. 1). Several members of the group recorded1 their travel experiences in diaries, letters and travel journals published later. They described how tirelessly Gérôme seized every available opportunity to make quick sketches. In an autobiographical essay of 1878 he noted: ‘Even when weary after long marches under the bright sun, I set to work zealously as soon as we reached our camping spot. But oh, how many things one must leave behind, keeping only the memory of them; and I prefer three touches of color on a patch of canvas to the most vivid memory; but we must forge ahead despite regrets’.2

Gérôme made the present oil sketch on an expedition to the Sinai Peninsula. His repeated visits to the area make it difficult to establish a precise dating for the sketch but it is likely that it was made in 1868. It is related to a number of similar travel sketches he produced in the same period,3 all of which are in oil on canvas and identical in format (23 x 31 cm). Pinholes at the edge of the image give insight into Gérôme’s working methods. He tacked the canvas to a firm, transportable base such as a wood panel before placing it on a sketching easel.

The Sinai desert with its vibrantly colored rock formations is still a popular travel destination today. Set at the foot of Mount Sinai, the ancient, Greek Orthodox monastery of St. Catharine was founded in the sixth century and is one of the world’s oldest Christian monasteries – a place where the cultural heritages of Judaism, Christianity and Islam meet.

1 Gérôme’s own notes recording his travel experiences have survived, as has a travel journal kept by the Dutch painter Willem de Famars Testas, a book by the painter Paul Lenoir and a large body of studies and sketches made on the expedition. Although Goupil’s fellow travellers mention his photographs it was not until 1996 that the Bibliothèque nationale de France, département des Estampes et de la Photographie was able to acquire an album of 79 photographic prints. The album bears a dedication to the painter and fellow traveler Ernest Journault. It is not inconceivable that Goupil gave each member of the expedition, including his brother-in-law Gérôme, a similar album, although Gérôme may have received a more complete group of prints. See Dominique de Font-Réaulx, ‘Gérôme and photography: accurate depictions of an imagined world’, in The Spectacular Art of Jean-Léon Gérômes (1824-1904), exhib. cat., Los Angeles, The J. Paul Getty Museum; Paris, Musée d’Orsay; Madrid, Museo Thyssen-Bornemisza, 2010-1, p. 234.