The two teachers who instructed Jean-Baptiste-Camille Corot in the basic tenets of classical landscape painting were the painters Achille-Etna Michallon and Jean-Victor Bertin. From the start, both artists actively encouraged him to make studies directly from nature in the tradition of Pierre-Henri de Valenciennes. Both had been pupils of Valenciennes. The twenty-nine-year-old Corot set out for Italy at Bertin’s instigation in the autumn of 1825. He arrived in Rome in November and wasted no time in exploring the historic and artistic attractions of the city and its environs. He rapidly produced a wealth of drawings and paintings. He was to continue to do this tirelessly throughout his three-year stay in Rome. Robaut’s catalogue raisonné of Corot’s oeuvre records over two hundred drawings and approximately one hundred and fifty small-format paintings – études d’après nature, or simply, études, as Corot himself described his Italian landscapes. Corot’s first stay in Italy was the most important period in his artistic career. The present oil study is a work from this key period.[1]

Corot’s skills as a plein-air painter clearly matured at a rapid pace. His initial practice was to work side-by-side with painters of his own age but after only a few months of working in their company sur le motif his talents outstripped theirs. By March 1826, he had earned the informal title notre maître from his French fellow-painters and friends.[2]

The studies Corot executed on his first stay in Italy are highly valued by present-day collectors. They rank among the masterpieces of nineteenth-century landscape painting and are the most highly sought-after works of Corot’s entire oeuvre.

The present study was executed in the summer of 1826 or 1827. This can be ascertained by studying Corot’s itinerary. In addition, the sun is high in the sky, the shadows are short and the light bright and evenly concentrated. These are clear indications of the summer dating.[3] The study depicts a section of the ancient aqueduct built by Emperor Claudius around 50 BC. Once a monumental structure, this great aqueduct was designed to transport water to serve the villas and imperial palaces on the Palatine Hill, one of the seven hills of Rome. This particular section of the aqueduct was restored in modern times. It is located on the Via di San Gregorio near the Forum at the foot of the Palatine Hill (Fig. 1).[4] Other plein-air painters have depicted the motif from a number of different viewpoints (Fig. 2).[5]

Corot’s handling of the motif has a certain photographic clarity but is in fact carefully composed. A succession of diagonals direct the eye across the image – along the length of the wall to the lower and then the upper perimeter of the aqueduct. Architectural detail and precise definition of vegetation are omitted. The focus lies on colouristic qualities and their relationship with the interplay of light and shadow. 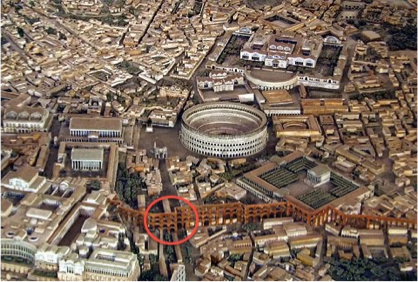 In Corot’s day, plein-air painting in Rome already boasted a fifty-year-old tradition. His own achievement lies in pioneering the lending of firm compositional structure to a randomly selected segment of nature. Peter Galassi writes: As an artist Corot has deployed ‘distance’ and reflection to meld the empirical precision of ‘plein-air’ painting with the painterly rigour of the classical tradition.[6]

Corot is one of the outstanding French painters of the nineteenth century. In the early years of his artistic training he concentrated on working in direct contact with nature – whether in Ville d’Avray where his parents had a country house, or in the environs of Paris, or in Dieppe and Rouen. He was one of the first painters to visit the forest of Fontainebleau – later made famous by the painters of the Barbizon School – before his first visit to Italy in 1825. He returned to Paris in 1828 and focused for a time on portraiture. He came into contact with Paul Huet, Théodore Rousseau and Narcisse Diaz de la Peña, making regular trips to Fontainebleau in the years 1830 to 1833. He visited northern Italy in 1834 and was back in Rome in 1843. In his later career he travelled extensively in France and was also in Holland, Switzerland and England. 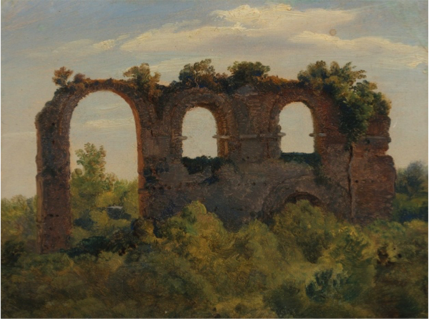 Major recognition as one of France’s leading contemporary painters began to emerge in the early 1840s. Private collectors in large numbers sought out his work and national institutions began to purchase his paintings.

In the 1850s, a change came about in his approach and he turned increasingly to a lyrical, Arcadian landscape style inspired by the evocative landscapes of Claude Lorrain. A Lorrainian mood of mysterious serenity was to characterize his later work but he remained dedicated to plein-air painting. At the Paris ‘Exposition Universelle’ in 1855 he was awarded a médaille de première classe. Delacroix and Dauzats both voted in favour of awarding him a médaille d’honneur. The 1859 Paris Salon brought him considerable financial success. He took a lively interest in the work of the Impressionists and maintained close contact with them from the mid-1860s onwards. They, in turn, thought highly of him and acknowledged the extent of their debt to his artistic achievement.[7]

[4] Corot chose a viewpoint on the east side of the old Via di S. Gregorio [widened in the 1930s] at the foot of the Celian Hill, near the steps leading up to San Gregorio al Celio. The architectural complex set on higher ground in the background of the painting is the Monastery of San Bonaventura al Palatino.