The Rhine Valley near Säckingen, 1881

Hans Thoma's emotional relationship with the landscapes of his youth - the southern Black Forest, his Heimat - was to have an enduring influence on his painting. He depicted the Rhine valley near Säckingen on a number of occasions over a period of twenty-six years. Each version of the subject has its own distinct individuality, both in terms of motif and atmospheric effect. Thoma chose as his viewpoint a slightly elevated position overlooking an expanse of meadow. The meadow slopes down towards the valley where the Rhine gleams against a backdrop of the high hills of the southern Black Forest.

The earliest version of the subject (oil on canvas, 61 x 110 cm, Thode 1909, p.62) is now in the collection of the Hans Thoma Museum in Bernau in the Black Forest. It was executed on one of Thoma's visits to his mother and sister in Säckingen in the summer of 1873. The painting shows his attempt to produce a realistic portrait of the landscape of his Heimat. In the foreground of the painting he depicts a farmer, his family and a donkey moving through a meadow of dense, tall grass.

The present version of the subject was executed in 1881. In the lush meadow in the foreground children are collecting grasses while cattle graze nearby. A repoussoir effect is achieved by the placement of a large tree, and beneath it, long shadows, in the middle ground at the left of the painting. It is used as a compositional device to close the image. Thoma's use of paint is sparing, allowing the outlines of the preliminary drawing to show through. His desire to create a poetically heightened view of the landscape of his emotional home is more than evident. 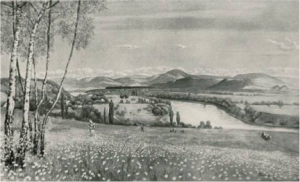 A final, larger version of the motif (oil on canvas, 108 x 178 cm, Kunsthalle Karlsruhe) was executed almost twenty years later, in 1899 (fig. 1). It depicts the Rhine valley in spring. Elegant silver birches have replaced the large tree depicted in the earlier version and instead of the children a woman is seen picking daisies. The development of Thoma's handling of the landscape is succinctly described in an exhibition catalogue published in 1989: The realistic portrait of the landscape has been transformed into an atmospherically heightened interpretation of landscape.[1]

As a young man, Thoma was self-taught. He began his artistic career studying at the Großherzogliche Kunstschule in Karlsruhe under Johann Wilhelm Schirmer from 1859 to 1866. A visit to Paris in 1868 with his friend Otto Scholderer was crucial to his later artistic development. While the impact of Gustave Courbet, Théodore Rousseau, Jean-François Millet and Edouard Manet clearly had a formative influence on his career, he saw their work as a convincing endorsement of his own artistic views. The centre of his activities alternated between Bernau, Säckingen and Karlsruhe. In 1877, he and his wife Cella moved to Frankfurt. He spent an extended period in Italy. Later, he returned to Italy, staying in Florence and also travelled to England and Holland. An exhibition of thirty-six of his works at the Kunstverein in Munich marked a career breakthrough. Demand for his paintings reached extraordinary levels and a stream of public awards followed. Named an honorary member of the Academy in 1895, he was appointed Preussischer Professor in 1898 and Director of the Karlsruhe art gallery and Kunstschule in 1899 (he resigned in 1919). In 1903 he received an honorary doctorate from Heidelberg University and in 1904 Bavaria's Maximiliansorden. His career reached its peak around the turn of the century.[2]