As the sun rises above the horizon spreading its light, a triton and a nereid emerge from the inky depths, the youth greeting the new day with the sound of his conch shell while his consort stares upon the mysteries of the watery realm with a dreamy gaze. This is how Henry Thode, Thoma’s friend and biographer, describes the present painting in his catalogue of Thoma’s paintings.[3] Thoma established a close friendship with Arnold Böcklin in 1874 and the art historian Bruno Bushard, writing in 1989,[4] attributes to this friendship the adoption of mythical creatures, fauns, satyrs, nymphs and mermaids in Thoma’s pictorial vocabulary. When Thoma painted the present work in 1892 he was almost certainly aware of Böcklin’s painting titled Triton and Nereid,[5] a commission executed for Graf Schack in 1874. However Thoma had already focused on the same subject before 1892. He was to return to it repeatedly in a variety of media.[6] 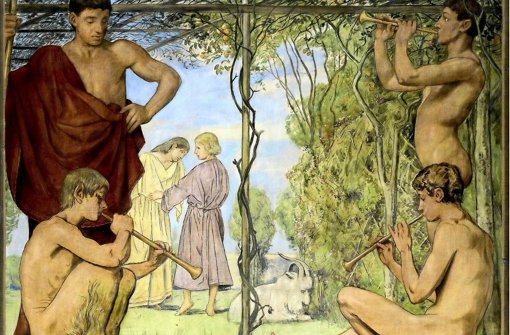 This painting dates from the latter part of a lengthy creative period in Frankfurt lasting from 1877 to 1899.[7] The idea for the painting germinated on a trip he and his wife Cella made with Henry and Daniela Thode to Venice in the spring of 1892. In Venice, Thode and Thoma invented what they called Federspiele [lit. ‘Games with the Pen’], a dialogue of words and images. This resulted in the publication of a small book featuring Thode’s poems and Thoma’s illustrations. Two of the poems in the book – first published in 1892 – are titled Meeressehnen [Longing for the Sea] and Hass und Liebe [Hate and Love]. Both poems are illustrated with images of tritons and sea creatures.[8] Thoma refers repeatedly to the beauty of the sea in his letters and notes. He was fascinated by the colouring of the sea and by the reflection of light on the water. In the painting he depicts the sunlight as silvery ribbons fanning out across the sky. The sun rising over the horizon catches the crests of the waves in golden light and heightens the gleaming bodies of the two sea creatures with streaks of gold. The sea god Triton is depicted as a conch-blowing merman – from the hips down with the body of a fish. The nereid balances herself on his fishlike body with her left arm around his chest. Her facial features bear close resemblance to those of Cella Thoma. The position of the triton’s upper body, depicted in profile, recalls the position of the naked shawmists in Thoma’s large-format painting titled Youths and a Young Satyr playing the Shawm in a Pergola (Fig. 1).[9] This frieze, designed to decorate the music room of the Pringsheim family residence in Munich in 1891, represented something of an artistic breakthrough for Thoma and brought him widespread public recognition.

The palette of dark blue, silver and gold, the economy of composition and the ornamental handling of the sunlight reveal Jugendstil influences. In general, however, Thoma always maintained a certain distance from contemporary artistic trends like Symbolism and Jugendstil – even though as a founding member of the Munich Secession he was fully conversant with the precepts of both movements.[10]

The first owner of the present painting was Mary Elisabeth Codman-Beikamp (1836-1929), an American collector married to Arthur Amory Codman (1833-96).[11] The Codmans initially lived in Zurich, where Mary Codman was introduced to Arnold Böcklin, who painted her portrait in 1889.[12] Later, the couple moved to Laufenburg in Baden-Württemberg, where the painting was almost certainly held at the time of publication of Thode’s catalogue raisonné in 1909.

Hans Thoma’s artistic career began – like that of many other artists of his generation – at the Academy in Karlsruhe. But he soon distanced himself from academic doctrine. By 1890, his position was one of tacit yet emphatic opposition to an artistic tradition that barred public recognition of his art. A powerful feeling of solidarity emerged in his friendships with like-minded contemporaries in Munich in the 1870s. These were the artists of the Leibl circle like Viktor Müller and Wilhelm Trübner; Arnold Böcklin and later, Hans von Marées. A visit to Paris in 1868 with his friend Otto Scholderer was highly important to his artistic development. While the impact of Gustave Courbet, Théodore Rousseau, Jean-François Millet and Edouard Manet clearly had a formative influence on his career, he saw their work as a convincing endorsement of his own mature artistic views. He was in Italy for four years, returned briefly to Munich and in 1877 moved to Frankfurt. Later, he returned to Italy, staying in Florence, and also travelled to England and Holland. He produced costume designs for the Wagners in Bayreuth and was befriended by Cosima whose portrait he painted. Public opinion warmed to his work in the 1890s. The change in sentiment can be attributed to an increasing public interest in international art in general and to the growing influence of French contemporary art in particular. An exhibition of thirty-six of his works at the Kunstverein in Munich marked a career breakthrough. Demand for his paintings reached extraordinary levels and a stream of public awards followed.[13] 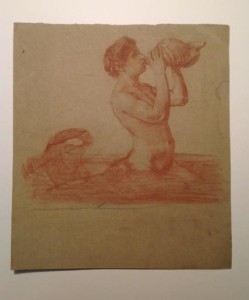 [2] Different dimensions are given for theTritonenpaar listed on p. 365 of the catalogue raisonné. However, there is no doubt whatsoever that the painting listed is the present canvas.