Expertise:
We are grateful to Dan Malan for his research findings and for his assistance in identifying and dating the painting.

Gustave Doré’s bizarre and fantastical motifs mark him as one of the most inventive and ingenious of the artists associated with the Symbolist movement. Largely self-taught, his versatility enabled him to alternate between subjects, techniques and genres and forge a highly successful career as a painter, watercolourist, draughtsman, printmaker and sculptor. His repertoire spanned historical, religious, literary and genre themes. He was also one of the leading landscapists of his generation and a painter of mountain scenes.[1] He also achieved wide popularity as a book illustrator. His illustrations document the closeness of his working relationships with significant literary figures of his time. Like many of his contemporaries he was the subject of harsh criticism as an artist but was very favourably reviewed by such important critics as Théophile Gautier and Emile Zola. Doré was one of the most successful and most widely fêted artists of the period both in Europe and overseas. His illustrations for what was known as the ‘Doré Bible’ made him a household name in the United States where an important market for his work developed. From the 1860s onwards his paintings were regularly exhibited in North America and highly sought after by American collectors.[2]

La Prairie occupies an unusual place in Doré’s oeuvre.[3] He painted three different versions of it over a period of twenty years, which strongly suggests that the motif had proved a popular success.

The viewpoint is unconventional. The eye is led from a recumbent position at ground level towards a dense and colourful medley of wild flowers blooming in a summer meadow filled with clover, poppies, carnations, oxeye daisies, dandelions, marguerites, wild chervil, cornflowers, buttercups and lush grasses. A strip of vivid blue sky populated with butterflies provides a canopy above the profusion of growth.[4] Doré’s brushwork is animated and expressive but attention to natural detail is not sacrificed. Frank Henry Norton, one of Doré’s early biographers, noted in 1883: Often in the long summer days he studied nature in her secretest haunts [sic], lying in the long grasses and amid wild flowers [...].[5]

A natural idyll, but for the scythe. Only close examination of the painting reveals it, truncated twice by the edge of the canvas. This sudden change of focus marks the painting as a characteristic Symbolist production – the scythe as a metaphor for death and the transience of things, the implacable cycle of growth and decay in nature. And it was seen by the public as such.

Doré’s popularity enabled him to set up a gallery in London under his own name – the ‘Doré Gallery’ – where selling exhibitions were staged. Mark Twain visited the gallery on a trip to London in 1872, where he saw La Prairie. He noted enthusiastically in his diary:[6] I believe the Doré Gallery has fascinated me more than anything I have seen in London yet. I spent the day there […] One large picture represents a bit of prairie - just a little patch of its tall grasses and flowers the same as if you were standing in the midst - and consequently every little detail of every slender weed and flower is minutely represented, although there is an infinite profusion of them - and the gaudy butterflies - they are of every species. Very well, one may say, many artists could counterfeit a couple of square yards of prairie. True enough; but while they were filling your heart with a careless delight of the transfer from the smoky city to the charm and the solace of the tranquil field & to the gentle companionship of the butterflies, would they startle you out of your pretty dreams with just a little touch of unobtrusive pathos? Such as, by & by, you all at once observe a scythe lying there half hidden by the luxuriant grasses! All beauty must fade; all that is precious must pass away; all that lives must die. Who but Doré could have written so beautiful a sermon with such a simple little touch of the brush? 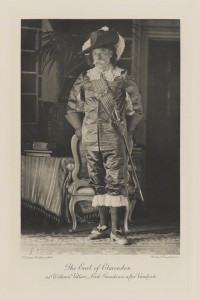 The St. Louis-based Gustave Doré expert Dan Malan has identified three versions of La Prairie in the course of his research into the present painting. They were executed over a period of twenty years. The fact that the three versions had been recorded under a number of different titles – La Prairie, Fleurs des Champs, Un Coin de Jardin, Midsummer and Summer – had previously made identification challenging. However, Dan Malan has now established that the present painting is the prima idea, the first version. It was exhibited at the Paris Salon in 1855. It remained in Doré’s possession until the last year of his life. Analysis of the paint surface coupled with an examination of the two signatures shows that Doré reworked the painting at some point, but only once. He did not part with it until 1883 when he sold it to the collector Edward Hyde Villiers, 5th Earl of Clarendon (Fig. 1).

The second, and largest version (Fig. 2) was loaned to the Museum of Fine Arts in Boston in 1871 and donated to the collection in 1873.[7] The whereabouts of the third version, executed in horizontal format in 1867, is unknown.[8]

[1] A comprehensive exhibition of Doré’s work was staged at the Musée d’Orsay in 2014. The exhibition later travelled to the National Gallery of Canada in Ottawa. The catalogue of the exhibition provides in-depth information on Doré’s life and work. See Gustave Doré (1832-1883): Master of Imagination, exhib. cat., Paris, Musée d’Orsay and Ottawa, National Gallery of Canada, New York 2014. [2] See Eric Zafran, ‘Doré in America’, in exhib. cat., 2014, op. cit., pp. 260-71. [3] Eric Zafran, Fantasy and Faith. The Art of Gustave Doré, New York 2007, p. 121. [4] We are grateful to the Munich-based entomologist Hans Mühle for his assistance in classifying the butterflies and moths. They are, from left to right and from top to bottom: an Old World swallowtail (Papilio machaon, Linnaeus, 1758); two common blue (classification not possible); a large white (Pieris brassicae, Linnaeus, 1758); a European Peacock (Inachis io, Linnaeus, 1758); two Silver-washed Fritillary (Argynnis paphia, Linnaeus, 1758). The butterfly at the extreme right may be a small white (Pieris rapae, Linnaeus, 1758) but the classification is uncertain. Below is a Red Admiral (Vanessa atalanta, Linnaeus, 1758) and just under it to the right, a Jersey Tiger (Euplagia quadripunctaria, Poda, 1761). [5] Frank Henry Norton, Paul Gustave Doré, New York 1883, p. 118. [6] Mark Twain’s 1872 English Journals, in Mark Twain’s Letters 1872-1873, V, pp. 614-21.

The American writer Mark Twain visited the Doré Gallery on a trip to London in 1872. His diary entries record the visit. Whether he saw the present painting or the third, horizontal-format version of 1867 (whereabouts currently unknown) cannot be established with any degree of certainty. Records show that both paintings were occasionally shown together at the Doré Gallery. Twain would not have seen the second version since this had been shipped to the United States in 1867.