Oil on canvas, 49.2 x 65.2 cm
Signed lower right G. Courbet.
Jean-Jacques Fernier has confirmed Courbet’s authorship and dates the painting to the period around 1869. It will be included in Volume III of his catalogue raisonné.

The present painting is one of a group of seascapes executed by Courbet on his visits to Trouville and Etretat on the Normandy coast between 1865 and 1869.[1] He liked to call these seascapes ‘landscapes of the sea’.[2] Known as La Vague [The Wave] among French critics and Wogenbilder [images of surging waves] in German art-historical literature, many of the paintings depict dramatic images of storm-tossed breakers pounding the shoreline. Courbet worked partly en plein-air and partly in the sea-front accommodation he rented.[3] Guy de Maupassant recalls seeing him on a visit to Etretat in September 1869: In a vast, empty room, a fat, dirty, greasy man was slapping dollops of white paint on a blank canvas with a kitchen knife. From time to time he would press his face against the window and look out at the storm. The breakers came so close that they seemed to batter the house and completely envelop it in foam and the roar of the sea. The salty water hammered the panes like hail and ran down the walls. This work became ‘The Wave’ and caused a public sensation.[4]

Some of Courbet’s paintings of surging waves, particularly those in large format, were completed in his Paris studio. Their extraordinary variety is astonishing, given the narrow thematic repertoire and repetition of the motif. He achieved this variety through frequent, close and prolonged observation of nature at first hand. Timing accounts for the differences between the paintings as Courbet responds to changing angles of vision, changing light conditions, changing weather conditions and the changing thrust of the waves. His dramatic images of surging waves represent a seminal achievement. They are the high points of all his ‘landscapes of the sea’. Each painting is a work in its own right.

The present painting depicts a massive breaker. It occupies the entire breadth of the image. A heavy bank of thundercloud blackens the sky and towers over the horizon. Courbet creates heavy impasto using a palette knife to build up layers of paint on the surface of the canvas. The sun illuminates and whitens the upper edges of the clouds against patches of blue sky. The horizon is set below the centre of the image – contrary to Courbet’s usual practice in his wave paintings – emphasizing the heavy sky and dramatic violence of the cloud formations. In many of his images of surging waves he uses a dual perspective: a low viewpoint at close quarters to underline the tremendous natural force of the approaching breaker and a viewpoint raised above the surface of the water to direct attention towards the dark mass of storm clouds looming on the horizon.[5]

Towards the end of Courbet’s life, ownership of one of his images of surging waves was a major desideratum for galleries and collectors of modern art.[6] The present work is closely related to a version of the same subject executed in 1869. This was at one time in the collection of the art dealer Durand-Ruel. There are distinct parallels in the handling of the wave and cloud formations, the use of a low horizon and the absence of a shoreline in the foreground.[7] A further, similar painting – dated 1870 and completed in the studio – is now in the collection of the Phoenix Art Museum in Arizona. It shows the sea under similar weather conditions and displays similar wave and cloud formations (Fig. 1).[8] 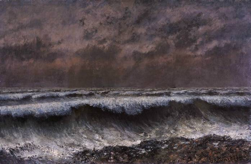 Courbet played a central role in developing new departures in mid-nineteenth century painting. His influence on the development of a number of European schools of painting – and German painting in particular – was unmatched by any artist of his generation. The son of a wealthy landowner, he was born in Ornans near Besançon in 1817. He settled in Paris in 1839 and was largely self-taught, sketching from nature and studying the Old Masters – Velázquez, Rembrandt, Frans Hals and Caravaggio – in the Louvre. He made his debut at the Paris Salon in 1844. In 1855, when his application to exhibit at the 1855 World’s Fair was rejected by the jury, he retaliated by organizing a pavilion to stage his own counter-exhibition of forty works under the title ‘Le Réalisme’. Encouraged by like-minded friends in Republican circles such as Proudhon and Baudelaire he set out to develop a realism which had as its objective ‘la vraie vérité’ – the real truth. He was persona non grata under Napoleon III. His role in the Commune of 1871 forced him to seek exile in Switzerland in 1873, where he spent the remaining four years of his life. He died in 1877.

[1] Robert Fernier, Gustave Courbet. Catalogue raisonné I/II, Lausanne/Paris 1977-8, nos. 493-752. The views of the cliffs at Etretat and of the sea at low tide or becalmed are not dealt with in this discussion of his work.

[3] Courbet first stayed on the Normandy coast near Trouville with Monet and Whistler in September to November 1865. He was to return in 1869. He spent September to October 1866 in Etretat with Boudin and Monet and stayed there again with Narcisso Virgilio Diaz de la Peña in August and September 1869.

[5] The double horizon line and the question as to the actual subject of Courbet’s seascapes (sky or sea) was much discussed during his lifetime and critical debate continues to this day. Courbet himself frequently adopted a distanced position on the subject himself: What are angles of vision? Do they even exist? Where I position myself [..] is entirely irrelevant; it is always right, if one’s attention is focussed solely on nature. See Klaus Herding, ‘Gustave Courbet’, in Impressionisten, Frankfurt, Städel, 1999, p.24, note 5.