The gallery is grateful to Christina Buley-Uribe for confirming the authenticity of this watercolor and for her research findings. Her extensive analysis of the development and history of the work is summarized here. She will include the watercolor in the Catalogue raisonné des dessins et peintures d’Auguste Rodin.
Her paper titled Rodin ou la métamorphose de la sculpture en dessin provides valuable insights into the complex relationship between sculpture and drawing in Rodin’s oeuvre.4 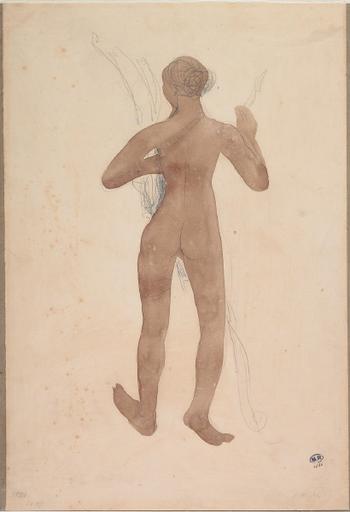 This watercolor and pencil drawing is unusually large in format.5 It is of remarkable aesthetic appeal and of special art-historical importance. Christine Buley-Uribe proposes to identify it as one of a series of nine large-format sheets exhibited by Rodin in 1900 – all depicting female nudes (Fig. 1). The exhibition was a self-curated retrospective staged at the Pavillon de l’Alma6 in conjunction with the Paris Exposition Universelle. To date, six of the nine sheets exhibited have been conclusively identified. Although Rodin annotated each mount with the word Marguerite two of the mounts are additionally inscribed Marguerite.Mirbeau. The original mount of the work discussed here is now lost but the traditional Mirbeau provenance points to the likelihood that it carried a similar inscription. The meaning of the inscription remains unclear. Quite possibly it refers to the figure of Gretchen in Goethe’s Faust,7 while the name ‘Mirbeau’ suggests a connection with Rodin’s close friend Octave Mirbeau. Rodin illustrated Mirbeau’s novel Le Jardin des supplices. The stimulus for this important series of female nudes almost certainly originated in an engagement with two contrasting female characters in literature – the pure, innocent Gretchen of Faust and the sadistic Clara of Le Jardin des supplices. Rodin went on to select one of the sheets as the model for an illustration in the de luxe second edition of his friend’s novel. It was published by none other than Ambroise Vollard in 1902. 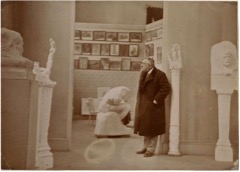 Fig 2. Auguste Rodin at the Pavillon de l'Alma exhibition in 1900

Rodin, unlike many other sculptors, did not see his drawings and watercolors as preliminary studies for his sculptural work. The viewer of a sculpture has the freedom to choose viewpoint, time of day and lighting conditions. Background can vary depending on the viewpoint. But none of these factors come into play in viewing a drawing – they have been predetermined by the artist. What attracted Rodin may conceivably have been the contrasting potential for visual interaction that sculpture and drawing offer the viewer.

Rodin wrote in 1903 in a letter to the sculptor Antoine Bourdelle: ‘My drawings are the consequence of my sculpture.’8 This remark clearly shows that he saw his drawings as an independent body of work while at the same time emphasizing the close connection they had with his sculptural work. In many of his drawings, most of them depicting the human figure, he would focus on outline, much in the way a sculpture is viewed in contre-jour. He also showed great ingenuity in using the silhouette as a vehicle to convey the essential characteristics of a model. The expressive power of the silhouette is strikingly portrayed in the photographs of Rodin’s Monument à Balzac taken for Rodin by his friend Edward Steichen (1879-1973), the noted American pictorialist photographer. Steichen spent two whole nights du coucher au lever du soleil in the park of the Villa des Brillants at Meudon photographing the sculpture by moonlight (Fig. 3). The photographs of the figure’s powerful silhouette are outstanding.
Rodin was profoundly moved when he saw the photographs: ‘It is Christ walking in the wilderness,’ he said to Steichen. ‘Your photographs will make the world understand my Balzac.’ To thank the photographer, Rodin gave him a bronze cast of L’Homme qui marche.9 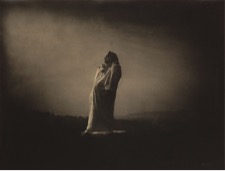 1 Sotheby’s received this information from the former owners in 2008. It may relate to the original mount (no longer with the work) carrying the inscription Mirbeau, like the other mounts of the Pavillon de l’Alma series. See the following paragraph.

2 This is the assumption of Christina Buley-Uribe.

5 The annotation ‘g’ in the lower right corner probably refers to the format - grand.

6 The retrospective Exposition Rodin was a huge success and represented a turning point in Rodin’s career. International politicians, artists, collectors, art critics, journalists and writers visited the exhibition. It contributed to Rodin’s international reputation as the father of modern sculpture. The Pavillon de l’Alma was a modern glass-and-iron structure especially built on Place de l’Alma for the Exposition Universelle. In 1901, the pavilion was dismantled and reconstructed in the grounds of Rodin’s country house, the Villa des Brillants in Meudon, where he had a studio. Many of his most significant pieces were created here, and the house itself became a port of call for an endless stream of friends, sitters, patrons and celebrities from across France and abroad - including Britain's King Edward VII. Rodin lived and worked at the Villa until his death in 1917.

7 It is not inconceivable that the figure represents Marguerite from Charles Gounod’s opera Faust. The opera premiered in Paris in 1859 and became one of the most frequently performed operas of its time.