August Wilhelm Ferdinand Schirmer[1] was court painter to Crown Prince Friedrich Wilhelm of Prussia, who succeeded Friedrich Wilhelm III as King of Prussia in 1840.[2] Like many of his contemporaries, Schirmer made a number of visits to Italy. His first visit was made possible by a commission from the Crown Prince. He set off in 1827 and spent the years 1828-30 in Rome. His first large-format painting of an Italian landscape and a number of smaller format works were transported to Berlin in 1828 to be exhibited at that year’s ‘Herbst-Ausstellung’.

The scenery of the Campagna Romana and the Colli Albani provided Schirmer with a rich range of motifs. In addition, he was receptive to the influence of the new artistic ideas and practices of his contacts in the international circle of artists working in Rome. He joined the Deutsche Künstlervereinigung and the Ponte Molle Society. He was a founding member of the Rome art association Società di Amatori e Cultori delle Belle Arti. In all probability he met up with Carl Blechen (1797-1840) soon after Blechen’s arrival in Rome in 1829. Blechen was a fellow-student from Berlin and the same age. Records show that the two artists explored the countryside near Rome on study trips.

This oil sketch depicts a landscape showing a section of the Via Flaminia to the north of Rome. The Via Flaminia led directly north from Rome through the mountains of Umbria to Rimini. Schirmer has chosen a viewpoint looking south with the ridge of Monte Soratte in the left distance. The partly overgrown arch of a high bridge carrying the Via Flaminia across one of the ravines between Narni and Otricoli occupies the middle ground. On the bridge, two diminutive figures gaze into the distant plain. The monumentality of the bridge – a fine example of Roman engineering skills – is heightened by its relationship to the surrounding landscape. Despite its relatively small format the visual and perspectival impact of the sketch is striking. 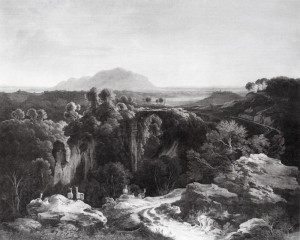 The sketch was almost certainly executed en plein-air. Schirmer used it – in conjunction with two other oil sketches[3] made on this first visit to Italy – as the basis for one of his major commissions, a large-format landscape executed in 1831 for the Crown Prince. The painting, which has not survived, was titled Landscape with Monte Soratte, ‘viewed between Narni and Otricoli’[4] (Fig. 1).