A Monumental Relief of an Amazon Watering her Horse, Rome 1898

Artur Volkmann began his training at the Leipzig Academy of Art in 1870. He moved to Dresden to continue his studies and from there to Berlin, where he worked under the sculptor Albert Wolff. The award of a scholarship enabled him to spend two years studying in Rome. Before he left for Rome, Volkmann was introduced to Konrad Fiedler. Fiedler, one of the leading German-speaking art critics and theorists of the period, was to become his mentor and patron. He put Volkmann in touch with the sculptor Adolf von Hildebrand and the painter Hans von Marées. Marées’ art profoundly affected Volkmann and was to serve as a key creative impetus. The two worked closely together in Rome from 1876 until Marées’ death in 1887.[1] Both artists were absorbed with the culture of classical antiquity, finding in it the stimuli to formulate ideas that interested them: the timeless determinants of the human condition – love, conflict and death. In this, they were influenced by the aesthetic ideas of Fiedler and his insistence on the autonomy of art. Volkmann – like Hildebrandt, Marées and other artists of the period – had by then distanced himself completely from the world of the Salon. His new ambition was to devise a form of idealization in sculpture derived from classical models. Pursuit of this formal objective was to continue into modernism and can be traced in the work of Picasso and Beckmann.

Volkmann’s collaboration with Marées in Rome influenced his own work to the extent that he attempted to translate Marées’ conceptual inventory and their joint enthusiasm for classical antiquity to his own sculpture. He was always receptive to creative advice from Marées, although much of this was intuitive and not systematic. 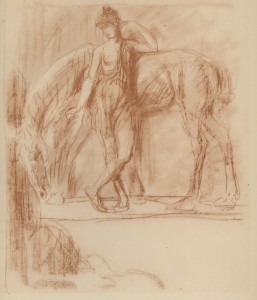 When Marées died, Volkmann stayed on in Rome – he had established himself in the city and was to live there for over thirty years. In 1910 he left Italy to take up a professorship at the Städelsche Kunstinstitut in Frankfurt. He moved again in 1923, this time to Basel, hoping for support from Heinrich Wölfflin whom he had met in Rome. He was accompanied by a pupil, Karl Fetzer. Volkmann spent the last fifteen years of his life studying art theory and writing his memoirs.

A preliminary drawing by Hans von Marées executed in 1886 for Volkmann’s Amazon (Fig. 1) and a further study of a horse are extant and, seen together, clearly constitute the prima idea for the present marble.[2] Two different versions of the marble are recorded. A first version is now in a private collection in Dresden. A second version is in the collection of the Staatliche Kunstsammlungen in Dresden.[3] The present marble is a further example of this second version. Dated 1898, it was executed while Volkmann was living in Rome and is worked in considerably greater detail. At the present time nothing is known about the commission or where the piece was originally intended to be installed. A feature distinguishing the two versions is the tunic of the amazon. In the first version it is open, revealing her right breast.[4]

The virtuosity of the present marble derives from the ingenuity of its basic concept and its meticulous execution. The use of a gold-leaf ground in the tradition of Byzantine mosaics makes the relief stand out against the background and its shimmer lends the relief a mystical quality. Volkmann, writing to his former pupil and friend Fetzer on 27 February 1930, gives a detailed account of his thinking on the piece at the time: I cut the figure of the amazon watering her horse out of the body of the horse, making the horse’s body curve towards the centre. [The amazon] has no flatness, nor does the horse seem bent out of shape and that is chiefly because the marble at the back of the withers and neck of the horse has been sharply bevelled. And its shoulder and forearm have been pushed back behind the female figure and the torso [of the horse] rounded off above and below. The shoulder of the woman emerges sharply against the receding withers. This and the virtually free-standing legs make it balanced, it loosens up the group, and both figures appear as independent beings. All this shows up the weakness of words versus creative form, one ought at least to have photographs to help explain. Perhaps the picture would be clearer if I point out that the body surfaces turn in opposing directions - the body of the horse from right to left, the body of the woman from left to right, so that the bodies separate at the left and converge at the right. The contrast creates clarity and enlivens, it emphasizes the illusionary aspect – via contrast, separation and interdependence.[5] 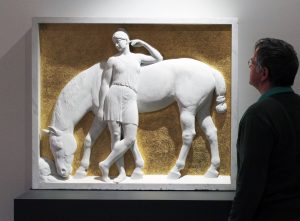 Volkmann had begun to experiment with polychrome sculpture in 1882 guided by classical models. Max Klinger (1857-1920) and Franz Stuck (1863-1928) were two artists who worked in the same medium. The marble now held in the Staatliche Kunstsammlungen in Dresden shows vestiges of colour in addition to background gilding. However the gold leaf is in a poor state of preservation. A noticeable difference between the present work and the Dresden marble is the finish – the present marble is more highly worked. That it carried no traces of colour before recent cleaning, apart from some thinning in the gold leaf, is an indication that Volkmann very probably did not envisage the piece in polychrome and for that reason may have sculpted it in greater detail. Some of his reliefs and sculptures did carry original polychrome decoration but in a number of cases this was removed at a later date.

The eighteenth-century art historian and archaeologist Johann Joachim Winckelmann (1717-68)[6] discovered traces of polychromy on antique marble sculpture. Since then, a long-standing controversy has persisted between champions of the traditional ideal of whiteness in antique statuary and supporters, basing themselves on scientific analysis, of the idea that antique sculpture was fully polychromed.[7] Unlike Volkmann, Klinger used varicoloured materials for his polychromed work. A good example is his polylithic statue depicting Beethoven enthroned, executed in 1886-1902. This is now in the Neues Gewandhaus in Leipzig.

[1] Volkmann designed the monument to Hans von Marées. It was commissioned by his friend Konrad Fiedler in 1910.

[4] Volkmann later designed a greatly modified version of the subject as part of a project for a monumental fountain. The project was never completed. A relief titled Man with a Bull was to be the pendant. See Deutsche Kunst und Dekoration, 17 (1905-6), p. 94.

[6] Winckelmann was aware of the existence of traces of polychromy on antique sculpture but he described the painting of marble as a barbaric custom. His followers continued to defend this view for many years by dismissing polychromed antique sculpture either as a primitive early form or attributing it to Etruscan art and treating it as an exceptional case.