The fragmentary character of this work lends it a distinctly contemporary feel. It invites the same associative response found in the reception of modern art, which tends to diverge from the reception of traditional art forms.

The severing of the upper half of the model’s head and her feet at the edges of the sheet is intentional. The model’s pose, back arched, palms pressed against her buttocks, is the primary focus of Rodin’s interest. Highlights of white bodycolor added to the void between right arm and back enhance the outer contours. The accentuation of the model’s waist-length tresses and her pubic hair is a typical feature of Rodin’s watercolors of female nudes. The rapidly applied pigment sometimes overlaps, sometimes misses the sketched outlines of the figure, creating fresh contours, in particular around the buttocks and legs.

Mes dessins sont la clé de mon œuvre,[2] Rodin noted in 1910. His remark underlines the central importance of drawing in his oeuvre. What attracted him to the medium was its two-dimensionality. Sculpture can be viewed from different vantage points, but a drawing can only be viewed from a predetermined viewpoint – the viewer is obliged to give his full, undivided attention to the viewpoint that the artist has selected. The photographs Rodin instructed his friend Edward Steichen to take of his sculptures fascinated Rodin similarly. His aim was not to dampen associative responses in the viewer but instead, to establish a mutual starting point from which both sculptor and viewer could embark on a receptive experience.

Most of Rodin’s drawings depict the human figure, albeit with very different creative intentions. The present sheet is the culmination of a new activity he began in 1896 - drawing à l’aveugle. This involved never shifting his eyes from the model and sketching rapidly without for a moment looking at the drawing. Nothing should be allowed to interrupt the flow of feeling from eye to hand. He wanted to absorb the secrets of the human form, to capture the essence of a pose intuitively. One of these sketches, now in the collection of the musée Rodin, is immediately preparatory to the present découpage. Hallmarks of the esquisses à l’aveugle are undulations, exploratory shifts and reprises (Fig. 1). 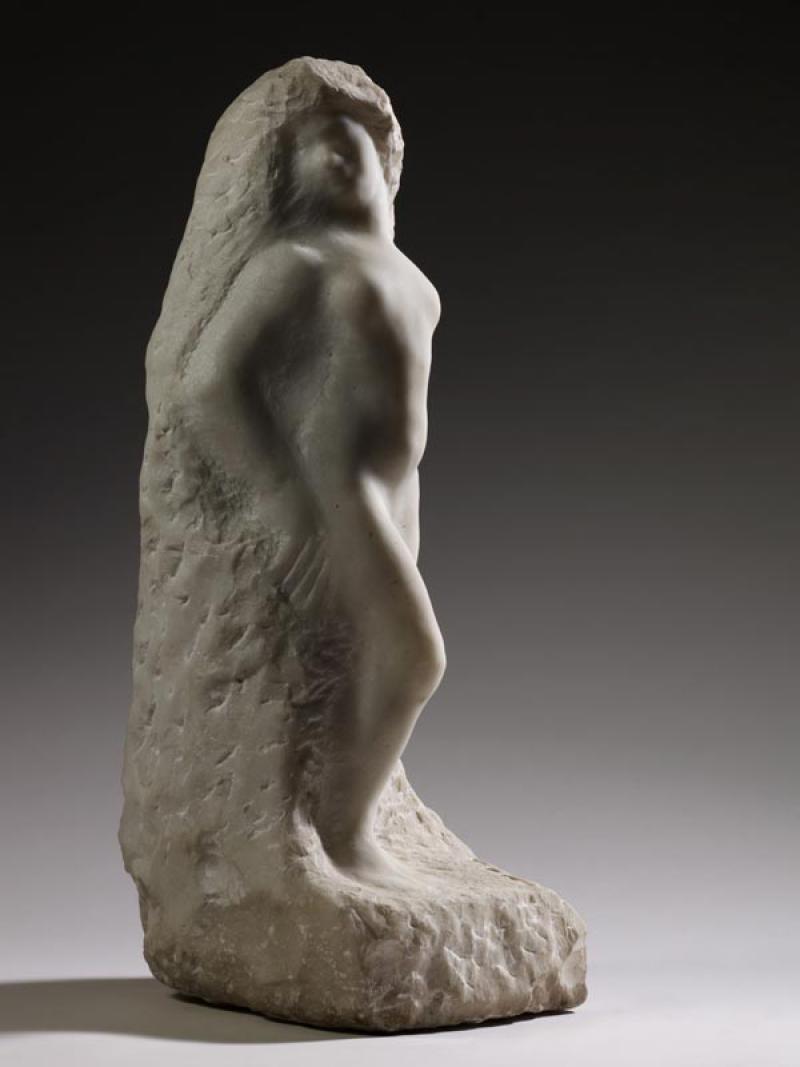 They are spontaneous sketches which were often reworked with the help of tracing paper. He would smoothen and refine a drawing that pleased him, preserving only the essentials – such as the interplay between the contours of the model’s back and right arm in the present sheet. The left arm in the void between the model’s right arm and back has been masked with a thin layer of white bodycolor, thereby intensifying the contours of the figure. Delicate touches of the brush accentuate the waist-length, brownish-black tresses. Tiny strokes of grey-brown add density to the pubic hair, which is absent in the preliminary graphite sketch. The present découpage is closely related to a marble version of Psyché-Pomone (Fig. 2) executed in 1904-6 and now housed in the musée Rodin in Paris. The figure emerges from the marble in michelangelesque non-finito, right arm bent, back arched and head turned to the right. In terms of pose it strongly recalls the present découpage (Fig. 3). 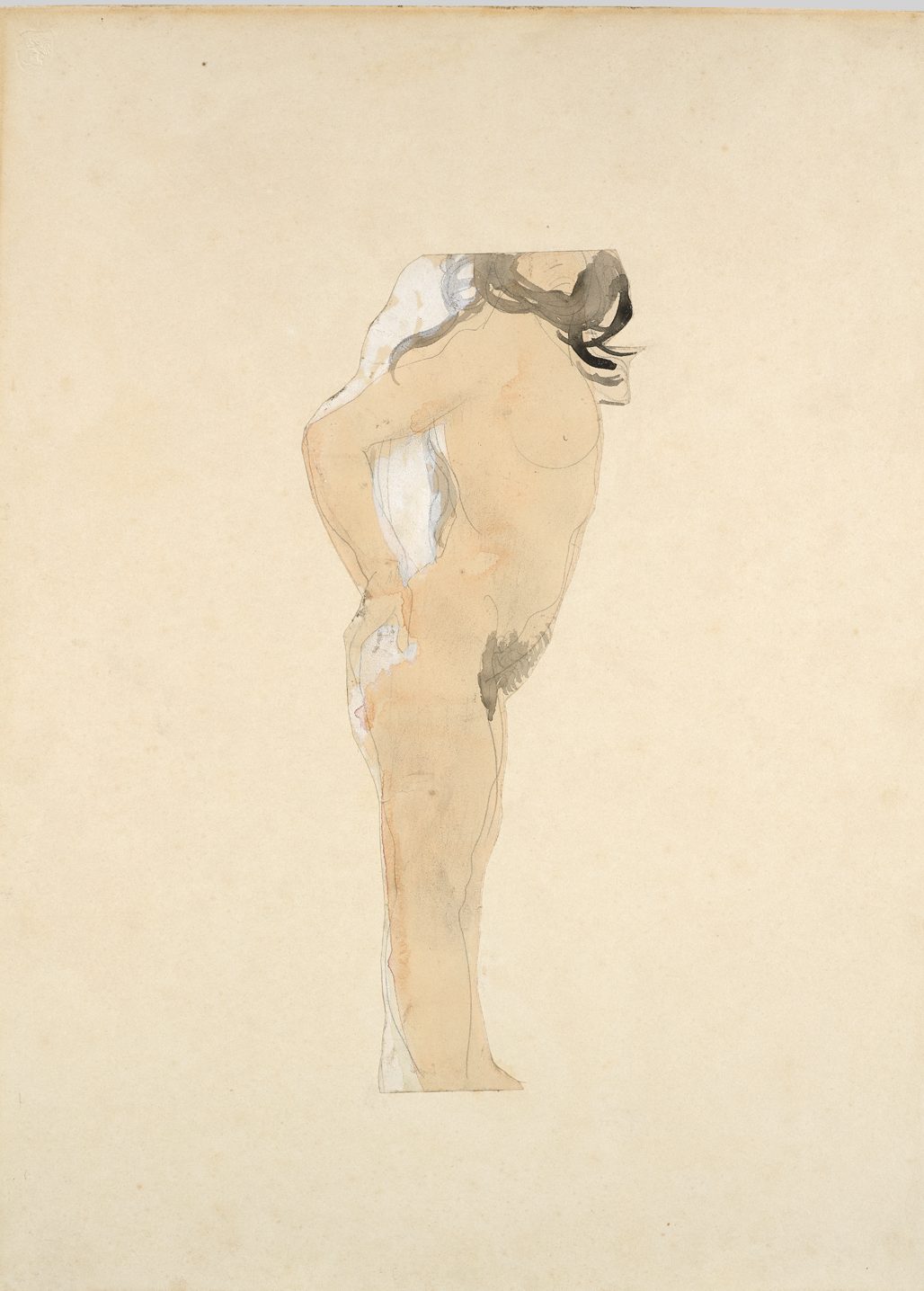 Rodin’s delineatory restraint and employment of flat, unmodeled watercolor wash heightens the sense of two-dimensionality. He deliberately dispenses with a background so that the figure seems detached from pictorial space. After 1900, every major national and international exhibition of his sculptures also included a substantial group of drawings and watercolors, often thematically arranged.

The découpages that Rodin produced between 1885 and the early 1890s occupy a unique role within his body of drawings. Most of the sheets are depictions of the female nude. Once a drawing was completed, he would cut the figure out and then begin to experiment with its spatial arrangement or position in relation to other figures. He would do the same with his sculptures, setting them up in new groups and different spatial settings. Photographs of the sculptures were handled similarly. He would cut the sculptures out and insert them into settings of his own creation or mount them in prints, for example vignettes. In retrospect, it could be said that Rodin was the inventor of the dessin decoupé and the related pasting and mounting techniques that were to appear in different contexts throughout modernism – for example, in the papiers collés of Picasso and Braque, the paper collages of Hodler, Klee and Schwitters and the celebrated papiers découpés of Matisse.

Until now, scholars of Rodin’s work opined that he did not exhibit his découpages or offer them for sale, unlike his other drawings and watercolors. Certainly, until very recently there was no evidence to the contrary. They should therefore be understood as an intimate part of his working process which he did not wish to share with the public. An additional reason for this assumption is that almost all the recorded découpages dating from Rodin’s mature period are held at the musée Rodin. Ninety-one formed part of Rodin’s bequest to the French State in 1916. Today, the bequest represents the basis of the museum’s collection. Six further sheets which once belonged to René Chéruy, Rodin’s secretary between 1901 and 1908, are now held in the Graphic Arts Collection of Princeton University Library. 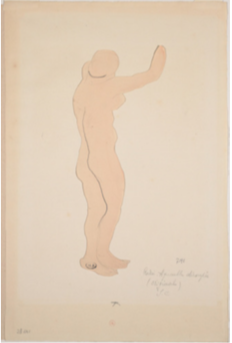 To date, only two découpages from this period have appeared on the art market, both of which are not on the original mounts. Both were acquired by the musée Rodin (in 1960 (Fig. 4) and 1994). The present work would therefore seem to be the only découpage still in private hands.

The present work was plainly laid down during Rodin’s lifetime. Little is currently known about its provenance and exhibition history. The dry stamp with the lion is not recorded in any of the three editions of Frits Lugt’s repertory, Les Marques de collections de dessins & d’estampes and is still unidentified. The various numbers and the label with the serrated edge on the verso of the mount indicate that the work was exhibited at some stage, although it has not yet been established when or where. One possible venue might be the exhibition held at Bernheim Jeune in Paris in 1907 – the gallery labeled its exhibits with similar serrated-edge

labels. Alternatively, it may have been shown at the exhibition at Kunstsalon Hugo Heller in Vienna in 1908. However that may be, the evidence that the present work provides certainly suggests that Rodin did in fact exhibit his découpages, contradicting previous opinion.

The short poem on the fragment of paper attached to the reverse of the mount is unquestionably in Rodin’s hand. Sadly, the inscription is so badly rubbed that the text is only partly legible.[3]

To sum up, the present work is remarkable for a number of reasons. On the basis of knowledge available today it can lay claim to be the only découpage by Rodin still privately owned. It was not mounted after Rodin’s death, but by Rodin himself and bears vestiges of a poem inscribed in his own hand on the reverse of the mount. Contrary to the previous scholarly belief that he did not exhibit his découpages because of their experimental character, it is highly probable that the present work was shown at a public exhibition during Rodin’s lifetime.