The viewer’s eye is immediately caught by the flamboyant ladies’ shoe placed as a focal point in the lower centre of the composition, the pink of its lining punctuating the restrained tonality of the painting. Only at second glance does one notice the figure of a woman lying on the bed. The contours of her naked body seem to merge with the tumbled bedclothes. No clues as to identity or narrative content are given. The woman is lying on her stomach with her back to the viewer, and her head, which is supported by her right arm, is hanging over the edge of the bed. Suggestive of a night of excessive drinking, her awkward, somewhat unnatural sleeping position is slightly reminiscent of Edvard Munch’s painting, The Morning After, executed in 1894-5, Nasjonalgalleriet in Oslo[1].

By the early 1880s Sickert had made something of a reputation for himself as a leading member of London’s artistic avant-garde. He enjoyed seeking his motifs in the dance and music halls of London. An intermezzo starting in 1899 took him to Paris, Venice and Dieppe, where he largely painted landscapes and townscapes. After recurring visits he finally returned to London in 1906.

Drawing on his experience of Parisian nightlife and the bustle of Dieppe, then a very vibrant town and magnet for avant-garde artists and intellectuals, he branched out in a fresh direction and began to focus on the subject of the female nude. His series of Camden Town nudes are raw, uncompromisingly realistic depictions of women sprawled out on simple iron bedsteads in the shabby Camden Town lodgings he rented as studios. For the following ten years, the female nude was to be Sickert’s central theme and virtually his trademark as a painter. 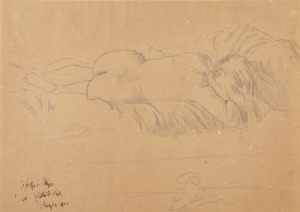 The Rose Shoe is the first of Sickert’s Camden Town nudes and one of his most important paintings. It marks a turning point in his work. Two preliminary studies for the painting are recorded in Wendy Baron’s catalogue of Sickert’s works: The Little Bed, a pencil and black chalk drawing executed in 1902,2 and Nude on a Couch, a pencil study executed in 1902-43. Here, the bed stands in parallel to the picture plane. In front of it is a lightly-sketched shoe (Fig. 1). In The Rose Shoe, Sickert choose to set the bed at an angle to the picture plane, thereby creating depth and enlivening the composition. The fall of light locates the subject in space and the nude’s contours are less sharply defined than in the two preliminary studies.

Sickert allows the viewer to take a private, unobserved look at the sleeping woman. This voyeuristic moment, combined with darker associations, and the unanswered question about the relationship between the painter and his model – is she a stranger, his mistress or a prostitute? – creates the ambivalence that makes The Rose Shoe so compelling.

The rapid style of execution and masterly reduction of the palette to a few, finely orchestrated tonal values – the only colouristic accent is the pink of the shoe – are indicative of the direction which Sickert’s work was to take in the years that followed. These paintings represent a radical break with academic tradition, eschewing any mythologizing embellishment.

Sickert’s interest in figures at the fringes of society - prostitutes, dancers and aficionados of the numerous bars and nightclubs in his neighbourhood – links him closely with Henri de Toulouse-Lautrec and Edgar Degas. Degas was a close friend of Sickert and had a significant influence on his art. Sickert was fascinated almost to the point of obsession by the activities of Jack the Ripper, the serial murderer of women from London’s East End. In the autumn of 1888 the Whitechapel Murders had begun to hold the city spellbound. Sickert almost certainly followed reports of the crime closely. Later, he was also to exploit the ‘Camden Town Murder’ - the violent death of a young prostitute in September 1907 – as the subject for a series of paintings. His morbid interest in this type of subject matter is well documented and has sometimes implicated him in the Ripper crimes. Jack the Ripper and Sickert are said by some to have lived in the same building in Mornington Crescent.4 One of the more far-fetched theories regarding Jack the Ripper’s identity is that he was, in fact, Sickert.

Sickert, who was born in Munich but moved to England as a child, was an influential figure in the transitional period between Impressionism and Modernism. In Britain, he is regarded as the country’s greatest painter between Turner and Bacon.