The Norwegian painter Thomas Fearnley is in many ways representative of the period in which he was active as an artist. Fueled by the desire to engage with leading contemporary artists and artistic developments he traveled incessantly, rarely staying longer than two and a half years in any one place. In his role as a committed traveler he was a model of the peripatetic painter of the early nineteenth century. After four years of training in Stockholm – Norway had no art academy at the time – he traveled to Dresden in early 1829 to visit his compatriot, friend and older colleague Johan Christian Dahl. Dahl was already an established and successful painter. Dresden had developed into an important center of contemporary painting in Germany, with Caspar David Friedrich, Carl Gustav Carus and Dahl at its nucleus. Dahl and Friedrich were appointed associate professors at the Dresden Academy in 1824 and held classes in their studios at Number 33, An der Elbe. They shared a house at this address from 1823 onwards, Friedrich occupying the second floor and Dahl the two floors above.1

The twenty-seven-year-old Fearnley’s sojourn in Dresden brought him into direct contact with Dresden Romanticism, the groundbreaking artistic movement of the period. It gave him the opportunity to study the work of C. D. Friedrich, Carus, Dahl and other Romantic landscapists at first hand and to immerse himself in their thinking about landscape. At the same time he was almost certainly involved in the hotbed of art-theoretical debate in contemporary artistic circles, a debate that today remains the basis of art-historical analysis of German Romantic landscape painting. A bond of friendship and mutual respect existed between Fearnley and Dahl. The latter’s influence is reflected in the realism of Fearnley’s approach and his direct portrayal of nature. Under Dahl’s guidance he deepened his landscape skills, producing oil sketches en plein-air. He adopted Dahl’s clear palette and free handling of paint, coupled with an interest in the effects of natural light, quickly developing a remarkable virtuosity in his own oil sketches.2 They demonstrate his unique powers of observation and strong sense of ambient atmosphere. Both painters found their motifs in the landscapes of Dresden and its immediate surroundings and were attracted by the outstanding natural beauty of the neighboring region. Fearnley first developed the idea for the present painting while traveling on the Saxon side of the Erzgebirge on a short journey to Chemnitz in September 1829. His route is recorded in a travel sketchbook now held in the Nasjonalmuseet in Oslo. A number of the sketches are precisely dated and others are carefully annotated, which helps to reconstruct the journey. From Dresden he travelled to Freiberg, reaching Lichtenwalde on September 20. He continued on towards the Erzgebirge (noting ‘a view of Augustusburg in the background’) and was in Gornau on September 22, reaching Chemnitz on September 23.3The sketchbook records a two-day stop in the Flöha Valley on September 21-22. 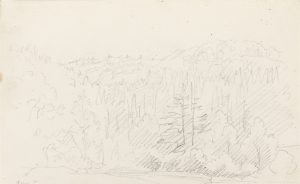 Fearnley made a number of preliminary drawings and oil sketches of his stop in the Flöha Valley. One of these is a pencil drawing (Fig. 1) now in the collection of the Nasjonalmuseet in Oslo. Soon after his return to Dresden he used the sheet as an aide mémoire to work up the present oil in the studio. The drawing depicts a bend in the Flöha River running between steeply wooded slopes near the hamlet of Grünhaininchen. This is close to the small town of Augustusburg in the Erzgebirge – both place names are noted in the inscriptions on an old label on the verso of the painting. The work shows the solitary figure of a countrywoman following a roughly paved riverside track towards a farmstead set at the edge of a pine forest.

Fearnley’s painting, like many of Dahl’s early works, is indebted to Dutch seventeenth-century landscape tradition. What is new, however, is the realism of his handling of light and color, and the inclusion of a human element. The painting also projects an other-worldly quality and this is highly characteristic of Dresden Romanticism.

After an eighteen-month stay in Dresden, Fearnley moved on. He traveled to Prague and Nuremberg, visited the many lakes in the Salzkammergut and finally arrived in Munich where he was to spend the next two years.4 He travelled in Italy between 1832 and 1835 before returning to Norway via France and England. Back in Norway he married Cecilie Catharine Andresen, the daughter of his patron. Their son Thomas was born in Amsterdam in 1841. With his family he moved back to Munich, where he died in a typhus epidemic in January 1842.

Fearnley is one of the leading northern European landscapists active in the early nineteenth century. The present painting is a striking early example of the formative influence exerted on him by the work of painters associated with Dresden Romanticism. It establishes him as one of the leading exponents of Romantic landscape painting and places him on a par with Dahl, C. D. Friedrich and Carus.5

4 In Front of Nature. The European Landscapes of Thomas Fearnley, exhib. cat., The Barber Institute of Fine Arts - University of Birmingham, 2012-3, pp. 31-2.