Theodore Rousseau’s romantic landscapes stand in contrast to the spirit of change driving the Industrial Revolution in France. Many of his landscapes celebrate the splendor of untouched nature and the extreme lighting conditions occurring at dusk and dawn. Paysage au Crépuscule depicts a sparsely vegetated landscape. A small stream leading from the foreground into the distance is visible in the center of the composition. The low horizon allows for a soaring, dramatically illuminated sky. Gathering clouds capture the light of a low sun, creating a striking symphony of color that is concentrated near the center of the image. Even the landscape itself is lit up by the burning sky. Solitary trees at the right connect landscape and sky, thus linking the two spheres of the twilight zone, a theme that inspired Rousseau throughout his career (see Fig. 1).

Paysage au Crépuscule was painted en plein-air. Rousseau and his fellow painters of the Barbizon School were pioneers in venturing out to observe and analyze natural forms and colors away from the studio. His resolve to work directly from nature derived largely from his admiration for seventeenth century Dutch landscape painting and the work of the English landscapist John Constable. Constable’s work had been exhibited at the Paris Salon in 1824, winning a gold medal. Today, Rousseau’s plein-air paintings are celebrated for their free brushwork and avoidance of unnecessary detail – for this reason they were the bêtes noires of contemporary critics. His refusal to conform to the canons of academicism and the oppressive rules of the Salon paved the way for the Impressionists and Post-Impressionists, whose plein-air landscapes are seen as the foundation of Modernism. Rousseau may thus be considered a precursor of the avant-garde and its different manifestations throughout the nineteenth and early twentieth centuries.1 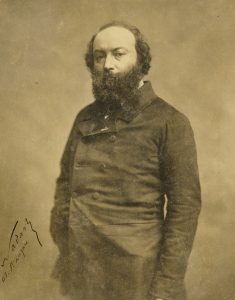 Recognition came to Rousseau relatively late in life. Although some of his work had been accepted by the Salon in the early 1830s, his paintings were continuously rejected between 1836 and 1841. He retaliated by boycotting the Salon in protest against the conservatism of the jury. This earned him the sobriquet le grand refusé. He explored the French countryside tirelessly, finding many of his motifs in the Auvergne and the Forest of Fontainebleau. A handful of critics and a number of his colleagues recognized his talent, this despite the repeated rebuffs his work had received from the official art establishment. The Revolution of 1848 – in which he had taken no active part – had temporarily weakened the power of academic juries. A committee of artists, including Rousseau, took charge of the liberated Salon. In 1848, the French government offered him an important commission for the Musée du Luxembourg. In 1849, he successfully exhibited three paintings at the Salon and was awarded a first-class medal. Henceforth, he was released from the obligation of submitting his work to the jury. In the 1850s his luck finally turned. He was appointed as Chevalier de la Légion d’honneur in long-awaited recognition of his artistic achievement in July 1852. An entire gallery was dedicated to his work at the 1855 Paris World’s Fair. Both national and international buyers beat a path to his door. But in 1860 misfortune struck. His wife’s mental health deteriorated, patrons deserted him and his own health suffered. Despite his election as president of the jury of the 1867 World’s Fair he remained deeply dissatisfied with his lack of social recognition. His health continued to decline and he relied increasingly on the support of his life-long friend, the painter Jean-François Millet. Napoleon III elevated him to the rank of Officier de la Légion d’honneur in 1867 but he had little time left to benefit from the award- he died in Barbizon in December of the same year.2