The group of young secessionist painters known as the Macchiaioli entered a new phase after the turbulence of their early years, when in 1861 they embarked on the discovery of landscape in the countryside of Tuscany. Their search for subjects was closely associated with the name of Diego Martelli[1] (1839-96) and the large country estate he owned near Castiglioncello, a small coastal town in the Maremma.[2] Martelli’s father had died in August 1861, leaving his son the estate. Martelli invited the Macchiaioli to visit him and the estate soon became something of a haven for them – a secluded setting where they could develop their artistic ideas and work directly from nature. The estate was to be their chief focus in the years that followed – Martelli was even to use the term ‘the School of Castiglioncello’. 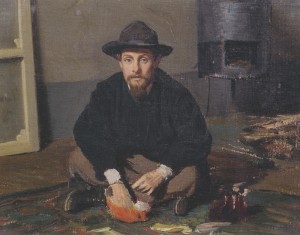 Martelli (Fig. 1) energetically championed the work of the Macchiaioli, becoming their theoretician and sponsor. He was one of the leading art critics of his time and kept in close contact with artists, writers and critics in Paris. He was a close friend of Degas and Zola. In 1867 he founded the journal Il Gazzettino delle Arti del Disegno, the voice of Italian artistic modernism in general and of the Macchiaioli in particular. Signorini was its leading columnist – he wrote twenty-five articles for the journal in the twelve months of its life.[3]

Signorini travelled to Castiglioncello in the company of Martelli, Giuseppe Abbati and Michele Tedesco on 4 August 1861. Signorini describes this first visit in his autobiography. He had recently returned from Paris and was full of fresh ideas. He had seen paintings by François Millet and Jules Breton, and been introduced to the work of Corot and Courbet. He had rounded off the visit to France by familiarizing himself with the whole range of contemporary developments in French painting at the Paris Salon. He was now well prepared to depict the striking scenery and intense light of the Maremma.

This oil study is one of very few extant studies executed by Signorini at Castiglioncello. The landscape is suffused with the warmth of direct summer sunlight. The composition is framed at the left by part of the high wall enclosing Martelli’s property. A mature agave hugs the foot of the wall and at its corner is an ilex. A single stroke of white is used to indicate a track which leads the eye towards a range of hills in the near distance. The rich, slightly iridescent tone of the exposed surface of the panel is allowed to show through, supplying a vibrant compositional element underneath the quick touches and dabs of the brush. These dabs of colour are highly characteristic of the work of the Macchiaioli. The support Signorini has chosen is a panel of thin satinwood veneer, a rare tropical hardwood traditionally used in cabinet-making in the eighteenth and early nineteenth centuries.