The Istituto Matteucci, Viareggio, has provided verbal confirmation of authorship.

Telemaco Signorini was one of the leading members of the Macchiaioli, a group of Italian realist painters active in Florence at the time of the Risorgimento and united by their wish to reinvigorate Italian art.1 After the turbulence of their early years, the group entered a new phase when in 1861 they embarked on the discovery of landscape in the countryside of Tuscany. In August 1861, three members of the group – the painters Giuseppe Abbati, Michele Tedesco and Signorini – were invited by the patron and art critic Diego Martelli2to visit the country estate which he had just inherited. Situated near Castiglioncello, a small coastal town in the Maremma, the estate was to be the chief focus of the group’s activity in the years that followed – Martelli was even to use the term ‘the School of Castiglioncello’.

Another rural setting regularly frequented by members of the group – particularly by Signorini, Abbati, Silvestro Lega and Odoardo Borrani – was the small village of Piagentina outside Florence. When Signorini’s father died in August 1862 the family decided to move from the city to the country. They settled in Piagentina, where Lega also lived. On fine winter days when Castiglioncello was too difficult to reach, members of the group met outside the Porta la Croce for strolls among villas and vegetable gardens, and along the Affrico, a small river which flows into the Arno. Signorini described their meetings: How enthusiastic, how elated we were, how frenzied our activity [... on] those beautiful days in this wonderful countryside, in our small circle of industrious friends [...] united by a common artistic ideal [...]. And how wonderful it was to spend the day painting by the Affrico or under the poplars on the banks of the Arno.3 While the paintings produced by the ‘School of Castiglioncello’ are notably homogeneous both stylistically and thematically, those produced by the artists of the ‘School of Piagentina’ show greater variety and disparity, with the originality of each artist increasingly taking center stage.4 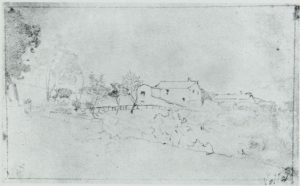 Signorini’s sketchbook drawing5 titled Campagna fiorentina (Fig. 1) can be seen as the prima idea for the present painting. The main focus of the image is no longer, as in the drawing, a distant group of buildings but a solitary house singled out from the group and viewed at close range. Emphasis is placed on the silhouette of the building and the crisp outline of its roof set against a broad stretch of cloudy sky. A wall truncates the foreground, forming a sharp diagonal and its barrier-like effect, in conjunction with the windowless façade, creates a sense of impenetrability and ambiguity. The muted palette lends the image a pensive, lyrical quality. The composition reflects early impressionist influences which Signorini had absorbed on a visit to Paris in 1861. He had seen paintings by Jean-François Millet and Jules Breton, and been introduced to the work of Jean-Baptiste Camille Corot and Gustave Courbet.