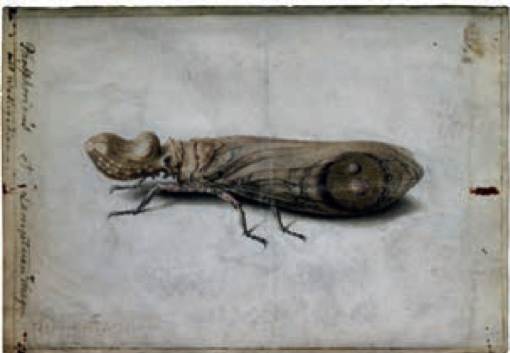 The lantern fly (Fulgora laternaria) belongs to the Hemiptera order, which includes cicadas. The insect depicted here is found in South America. Viewed from above, its extended forehead resembles a peanut, while from the side the head looks like the mouth of an alligator. The name ‘lantern fly’ derives from a belief that the two-humped protuberance on the head emits light. The lantern fly is light brown. Fine blackish brown penstrokes outline the insect’s forms and describe the delicate structure of its wings. Watercolour, including pale wash, renders the head and legs more vivid. Maria Sibylla Merian, who saw the insect on her expedition to Surinam, included it in her Metamorphosis insectorum Surinamensium (Amsterdam, 1705), which made it better known. Holsteijn’s image predates that illustration by about fifty years. Yet it was not the first: the earliest realistic depiction was painted by Jacques de Gheyn II in watercolour on vellum (fig. 1).1 Dated 162o, this continued the series of small natural history studies by de Gheyn in an album that must date from c. 16oo–o4.2 Holsteijn did not base his depiction of this striking insect on de Gheyn’s version, but created his own image. Like de Gheyn, however, he took a mounted specimen as his model.