Pen and ink, watercolour with body colour and gum arabic, 157 x 202 mm
Paper, all edges trimmed smoothly, watermark (upper edge, above the insect): upper section of a coat of arms (watermark A)
Inscribed PH (monogrammed, centre, between the insect’s feet) and een wee-mol (lower right, in brown in another hand) 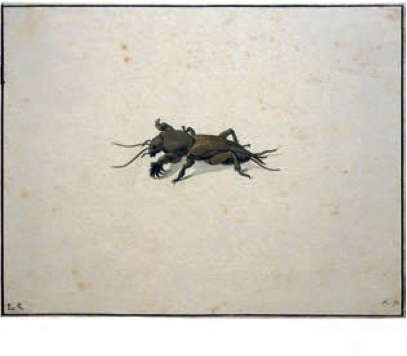 The mole cricket (Gryllotalpa gryllotalpa) is named after its ability to dig a passage through earth by shovelling away the soil with its forelegs. Holsteijn’s depiction is naturalistic and accurate. It shows the variously articulated rear segment of the body, the close-fitting wings with their black veins, the head shield, the head with one of its eyes, the two ‘shovelling’ feet and the four other legs. The hard head shield serves to compress the earth when the mole cricket is tunnelling. Holsteijn renders the insect’s inconspicuous colouring as a symphony in shades of brown and black. He enhances the feeling of three-dimensionality and the almost tangible sense of texture by applying gum arabic to the digging feet and the eye, which increases the luminosity of the colour. Coming from above, the light produces cast shadows that emphasise the spatial dimension of the body, antennae and legs. The artist clearly thought about the function of the limbs down to the last detail and represented them accordingly. 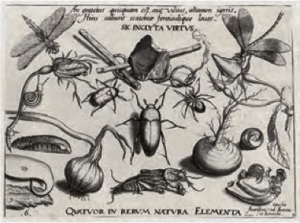 A mole cricket by Holsteijn in Copenhagen was based on the same source image (Copenhagen, Royal Museum of Fine Arts, Department of Prints and Drawings, Tu Nederl. Mag. II, 26; fig. 7). Its interior drawing is slightly less subtle, and the spatial impact of the insect as a whole less striking. The mole cricket, called veenmol (moor mole) in Dutch, is native to Europe and had already been depicted by Joris Hoefnagel. His son Jacob included it in Archetypa Studiaque Patris Georgii Hoefnagelii (Frankfurt, 1592, Pars III, 6; fig. 8). In that composition, which uses natural objects to symbolise the four elements, the mole cricket stands for earth. A copy of the Archetypamole cricket appears in Diversae Insectarum Icones (Amsterdam, 1630, no. 4). Hoefnagel was obviously intrigued by the bizarre appearance of the insect, but his version is less naturalistic than Holsteijn’s.