The Masqueraders – Before the Ball, 1881

In the early eighteenth century, masquerades and fancy-dress balls grew popular all over Europe. Unlike the majority of painters who depicted the social event itself, for example Edouard Manet – his famous version is now in the collection of the National Gallery of Art in Washington3 – Otto Scholderer chose to depict a group of eleven women preparing for the revelries. The costumes they wear are from many different cultures and historical periods. He conjures up an impressive large-scale line-up of ball-goers in the guise of figures from the world of literature and the visual arts, from the present day and the past, 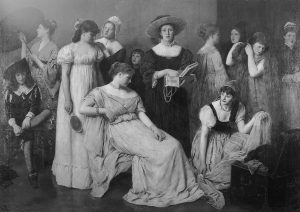 the real world and the theatre. As Jutta Bagdahn observes: The painting is very much a hommage to female models, in a broader sense, to art itself.4 But in the course of the painting’s conception Scholderer also drew on contemporary models and earlier pictorial traditions. The viewer finds himself reminded of Liotard’s Belle Chocolatière, Manet’s barmaid Suzon and especially, Gainsborough’s Blue Boy.5 National or ethnic costume was another popular choice for masquerades and Japanese-style costume in particular.

Scholderer executed his first version of the motif, titled Preparing for a Fancy-Dress Ball (Fig. 1), between October 1879 and February 1880. When the painting was exhibited at the Royal Academy in 1880 it was greeted with a barrage of criticism. In a letter to Henri Fantin-Latour dated 8 June 1880 Scholderer noted that he had grown displeased with the painting since there are many bad things about it, I hope to be able to improve them when the work returns from the Academy (...).6
Preparing for a Fancy-Dress Ball was sold to a buyer from Manchester in the autumn of 1880. Despite the harsh critiques, an anonymous client took a liking to the subject and commissioned Scholderer to produce a second version – with the proviso that it would be exhibited at the Royal Academy. Scholderer refused, but returned to the subject of his own accord in spring 1881. In a letter to his friend Fantin-Latour dated 18 April 1881 he elaborated on this: At the moment I am working on a kind of reproduction of my painting of last year, the preparations for a fancy-dress ball. I am most content to be doing it again, I think it will be better; I believe that last year that painting taught me a great deal.7

The present painting shows that Scholderer made determined efforts to respond to the criticism directed against his first version of the motif. The women’s bearing, the interaction between them and the way some of them seem to bask confidently in the viewer’s gaze now have a graceful elegance. Some of the models have been replaced. Some of the preparatory studies for this second version are now held in the Graphische Sammlung des Städelschen Kunstinstituts in Frankfurt.8

Scholderer9 trained at the Städelsche Kunstakademie in Frankfurt in the 1850s. Early in his career he met Gustave Courbet. He travelled to Paris for the first time in 1857, visiting his friend Victor Müller who was a student of Thomas Couture. Scholderer joined Courbet’s circle of friends. It was here, in 1858, that he was to embark on a lifelong friendship with Henri Fantin-Latour. The correspondence between them is largely preserved. It offers important insights into Scholderer’s biography. Müller had settled in Munich and was briefly joined there by Scholderer. This brought Scholderer into contact with Wilhelm Leibl. In 1871, Scholderer moved to London, where he specialized in genre painting and portraiture. His style of life changed dramatically – he now lived as a recluse with little contact to English painters, whereas in Paris he had been an active member of the artistic community counting many of the leading artists of his time as friends. His work was noticed by London critics well into the 1880s, but he failed to achieve a major breakthrough in his lifetime. Why he never returned to his beloved Paris remains unexplained. The Masqueraders – Before the Ball ranks among Otto Scholderer’s masterpieces.

2 Jutta Bagdahn has succeeded in identifying two of the nine works that were exhibited at the Kunstverein in Frankfurt in the winter of 1883. They are: Fresh Herrings!, Bagdahn 216 and The Masqueraders – Before the Ball, Bagdahn 196 (the present painting). See Bagdahn, Otto Franz Scholderer, Monographie und Werkverzeichnis, Freiburg 2002, p. 190.

5 The Blue Boy would have been easily accessible to Scholderer at the time of his stay in London, where it belonged to a private collection. It is now one of the highlights of the Huntington Art Collections in Pasadena.