The Norwegian artist Peder Balke is a solitary figure among the painters of the early nineteenth century. With historical hindsight, his work appears modern. Art historians compare his painting to that of Caspar David Friedrich and William Turner.1 Even today, artists draw inspiration from his work.2

Balke’s landscape paintings are inspired by the rugged nature of northern Norway, which the artist first experienced in the autumn of 1832 when he traveled to the Finnmark region.3 This trip was of key importance to his further development. The impressions and motifs gathered on that trip recur continually in his later work. Balke did not strive for topographical accuracy; instead, he endeavored to produce an exaggerated image of the Norwegian landscape. This certainly reflected Balke’s national ambitions, for he sought through his painting to assist in shaping the identity of a sovereign Norwegian state.

In the 1840s, Balke’s painting, largely unnoticed by his contemporaries, reached its first peak. In 1844, a lack of commissions forced him to leave Norway and seek his fortune in Paris. The journey took him to Copenhagen, Kiel, Altona, Cologne and Brussels, before his arrival in Paris in the late summer of 1845.4 It is not known how long Balke and his family stayed at any of those stopover points. As indicated by Marit Lange in her expertise, our painting, dated 1845, probably originated in Germany.

The painting fits into a group of seascapes executed in 1845. The mountains in the background, for example, recall the Trolltinden massif, which Balke depicted in another painting made at about the same time (fig. 1).5 Since the early 1840s, he had preferred a monochrome palette reminiscent of Dutch grisailles of the seventeenth century. Blue and grey dominate our painting; only the sailing ship stands out. The crests of the waves in pastose white accentuate the play of the breakers, while the mighty mountain range rises surrealistically from the mist. 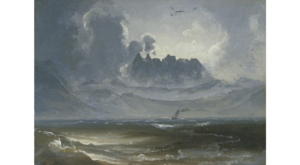 Proceeding from Dutch marine painting of the seventeenth century and the well-known compositions of the Romantic era, Balke developed ‘landscape visions’ (‘Landschaftsvisionen’) of his own.6 The motif of a ship battling the stormy sea is drastically simplified and given a metaphorical dimension: it remains uncertain whether we, who are all sailing on the sea of life, will arrive safely or tragically founder.

3 The Finnmark region lies in the extreme north-east of the country and is the only part of Norway that borders on Russia. Balke traveled from Trondheim to Nordkap and farther eastward to Vardø and Vadsø. For his travel route, cf. Paintings by Peder Balke, exhib. cat. London, National Gallery, Tromsø, Northern Norway Art Museum, London 2014, p. 64.

4 In Paris he succeeded in obtaining an audience with King Louis-Philippe, who, as a young man, had toured the north of Norway in the years after the French Revolution. Balke showed the king a selection of oil sketches depicting scenes of northern Norway, from which the king chose several to be used as models for large-format paintings. Twenty-six of these oil sketches survive and are now on display in the Museé du Louvre. Balke’s artistic future appeared to be secure, but the 1848 revolution in France put an abrupt halt to the King’s plans, and Louis-Philippe was forced to abdicate. At the end of 1847, Balke saw no alternative but to leave Paris. First he spent a short time in Dresden, but in the spring of 1849 he set out for London. There he had the opportunity to study the work of William Turner, whose paintings strengthened his resolve to make radical changes to his painting technique. Cf. Marit Ingeborg Lange, ‘Peder Balke: Vision and Revolution’, in Paintings by Peder Balke, op. cit., pp. 6-41.