The Flower Terrace, Wannsee Garden to the North-West, 1917

Horace’s celebrated remark encapsulates the depth of Max Liebermann’s attachment to the gardens of his summer residence on the shore of Berlin’s Grosser Wannsee. Here, he found sources of creative inspiration as well as refuge from hectic city life. He went on to produce a vast body of work documenting the variety and detail of every inch of his Wannsee gardens – compelling visual evidence of its immense importance to him.

In 1909, Liebermann acquired one of the last available lakeside plots in what was then one of Berlin’s most fashionable villa districts, the ‘Colonie Alsen’ in Wannsee. He decided to build a summer residence for his family and entrusted the architect Otto Baumgarten with the construction of a small villa in neoclassical style. The family moved into the villa in July 1910 and in the following twenty years spent their summers there. For the rest of his career, Liebermann’s preferred subjects – in addition to close family members – were to be the villa and its gardens.

The gardens were designed (Fig. 1) by the landscape architect Alfred Brodersen and modelled on ideas suggested by Liebermann and his friend Alfred Lichtwark. A leading garden-design reformer, Lichtwark was also director of the Kunsthalle in Hamburg. The property was around 7,000 square meters in area and oblong in shape. It was divided into two parts, each with a number of separate areas – one part, on the front or street side, with a functional kitchen garden and adjoining it, a cottage-style flower garden and its lush herbaceous border; and the other, on the lake side, with a flower terrace, three rectangular ‘hedge gardens’, a birch grove and a large expanse of lawn providing an open view out across the lake.

Fig. 1 Plan of the Wannsee garden

The flower terrace linked the villa with the lawn as it stretched out towards the shore and is particularly prominent as a subject in the large body of work Liebermann produced at Wannsee. In each of these versions he highlights a fresh aspect of the subject and selects a different section as his motif, changing his viewpoint, altering his position. Each version is a work of art in its own right. Nothing is replicated.

The present painting was executed in 1917. The perspectival effect of the compositional structure focuses on the yellows and blues of formally arranged flower beds. Each spring, Liebermann would have the beds planted with yellow and blue pansies. Their geometric arrangement, the sharp diagonals formed by the paths and the line of the terrace wall create a powerful sense of spatiality. A dark tree trunk – cut off by the upper edge of the image – leans into the composition at the left. It cuts across the villa’s lower facade and ground-floor shutters, acting as a compositional device to counterbalance the steep diagonals formed by the path. At the far right is August Gaul’s Otter Fountain, set in front of a lilac bush with billowing blooms of purple and white. Liebermann had given the fountain to his wife, Martha, as a Christmas present in 1909.

Liebermann had completed two thematically related paintings a year earlier (Eberle 1916/18 and 1916/19).2 They demonstrate how varied his handling of the subject was, how he selected different sections of it and adopted different viewpoints. The paintings also display distinctive differences in terms of color. In the present work, a figure – absent from the two earlier versions – is shown tending flowers by the right wall of the terrace. 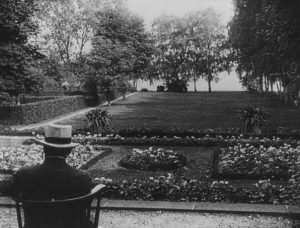 A distinguishing feature of the painting is the use of freely applied impasto, particularly in the handling of the flowers and shrubs. Although botanical accuracy was not Liebermann’s objective, depiction of formal characteristics remained precise. He painted en plein-air in the Wannsee gardens, only working in fine, sunny weather: As soon as the weather allows one to work outdoors again I will begin work on a new painting [...].3 Unlike Monet, it was not so much the changes in the time of day and the seasons that interested him, but rather the richness and chromatic variety of nature.

1 That corner of the earth smiles for me more than any other. Cited after Jenns Eric Howoldt, ‘Die Gartenbilder und ihr zeitgeschichtlicher Hintergrund’, in Im Garten von Max Liebermann, Hamburger Kunsthalle and Alte Nationalgalerie, Berlin 2004-5, p. 11.