Lovis Corinth’s painting has long been the subject of speculation and controversy among art historians. Is it to be classified as a product of the nineteenth century or the twentieth century? Is it essentially traditional or can it be seen as a forerunner of modernism? Only recently have the apparent contradictions in his work and the absence of continuity come to be accepted and better understood. The German art historian Georg Bussmann noted in 1985: ‘He paints as if starting from the zero point of painting and each time it’s a case of “wrestling with an angel”. He sacrifices a portion of his professional credibility and experiences painting as the ultimate, true adventure.’2 Corinth’s early history paintings are highly likely to generate ambivalent feelings in the modern viewer. Their dramatic directness – often to the point of absurdity – surprises and shocks. One major aspect of his painting which earlier art historians frequently condemned as tasteless is however highly interesting – namely his naturalism.

This painting was executed in 1898, which was towards the end of Corinth’s second sojourn in Munich. In the 1890s the city was a major center of artistic innovation. By then Corinth was no longer an unknown painter. He had exhibited work at the Paris Salon and in London after a long and multifaceted apprenticeship. A first period of academic study in Königsberg was followed by a first stay in Munich from 1880 to 1883 training at the Academy of Art. Periods of further study abroad followed – a brief stay in Antwerp working under the painter Paul Eugène Gorge and a longer visit to Paris studying at the Académie Julian under Adolphe William Bougereau and Tony Robert-Fleury. Corinth visited Berlin in 1887, where he came into contact with Max Klinger, Walter Leistikow and Karl Stauffer-Bern. In Paris he was particularly impressed by the work of Jean-Louis-Ernest Meissonier and Jules Bastien-Lepage, and paintings by Wilhelm Leibl on exhibition there.

Nothing is known about the raison d’être of the present painting or the identity of the figures represented. Neither Corinth himself nor the sources available throw any light on the painting. However it is known that the title Lebensfreude is indeed the original title. The painting was exhibited with this title at the spring exhibition of the Luitpoldgruppe in Munich in 1899,3 a year after its execution. Charlotte Berend-Corinth, in the first edition of her catalogue raisonné published in 1958, mentions a large group of studies with an emphasis on hands. 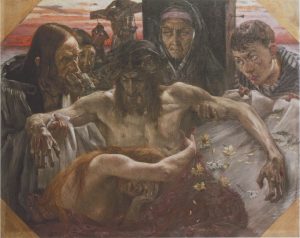 Two young couples of marriageable age are depicted in the background. The couple on the left are singing from a song sheet. The couple on the right embrace tenderly while one of their interlaced hands ostentatiously displays a wedding ring. A woman in the foreground has her arms around a young boy and a girl in a protective gesture. All three hold a flower. In religious iconography the lily is a symbol of purity associated with the Annunciation and the rose is associated with the Virgin Mary. In portraiture the carnation symbolizes betrothal. Fluttering butterflies and branches of horse chestnut with pink blossom fill the last remaining space in this tightly composed composition. The complex interplay of the hands expresses the relationship between the figures in skillful old-masterly manner. 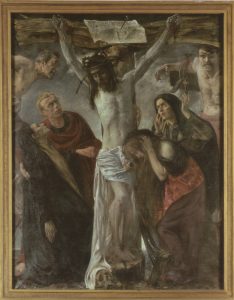 It is instructive to compare the painting with other works executed both before and in 1898. Notable examples are the two masterly Slaughter House scenes of 1896-7 together with an important group of religio-historical and mythological subjects. These include Descent from the Cross (1895), which is very similar to the present painting in terms of compositional construction (Fig. 1); Bacchic Procession and Bacchanale (both 1896); Birth of Venus (1896); Crucifixion (1897) (Fig. 2); Susanna and the Elders (1897) and The Temptation of St. Anthony (1897). In this period he made a series of female portraits, tightly formulated busts and heads that strain to make eye contact with the viewer in a highly insistent way. It seems as if the central female figure in the present painting, whose features are shaded by a wide-brimmed hat, is also challenging the viewer to make eye contact. The resemblance between the young couple on the left and the figures of the Virgin Mary and St. John depicted in the Crucifixion of 1897 (Fig. 2) suggests that he used the same models. Corinth’s own portrait is recognizable in the grimacing features of the figure at the right in the Crucifixion. In spite of their countrified style of dress the figures depicted in the present painting are by no means country people. They are confident and unselfconscious, the models presumably being chosen from Corinth’s circle of friends. 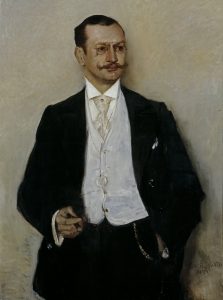 The personality of the present painting’s first owner might possibly help to explain its raison d’être. On completion it was immediately acquired by Carl Strathmann (1866-1939), a Munich painter who had earlier struck up a close friendship with Corinth. A series of postcards from Corinth to Strathmann attest to the warmth of their friendship and provide insight into their social milieu. In his autobiography Legenden aus dem Künstlerleben (1909/1918)4 Corinth characterizes his friend as a jovial bon vivant. The portrait he painted of Strathmann in 1895 represents him as a dandy brimming with self-confidence and lust for life (Fig. 3). It is thus not unlikely that the present painting was intended by Corinth as a personal tribute to his friend.