The popularity of Amazons on horseback bears witness to the great appeal Antiquity exerted in the nineteenth century, particularly in Germany. Two important examples are the statue by August Kiss (1802-1865) in front of the Altes Museum in Berlin and the one by Franz von Stuck (1863-1928) in front of the Villa Stuck in Munich. It was only when he created his Amazon on Horseback at the age of thirty-three that Louis Tuaillon became known to a wide audience. In 1894, while in Rome, he produced a design for the life-size sculpture, which was cast in bronze later that year. The sculpture was shown at the Grosse Berliner Kunstausstellung in 1895. The Nationalgalerie in Berlin acquired the work in 1897 and exhibited it in the colonnaded courtyard in front of the museum’s west façade. In 1904-05, at the behest of Kaiser Wilhelm II, a larger-than-life cast was made and installed in the Grosser Tiergarten in Berlin.

This statue is a smaller version of the one in the Nationalgalerie. An Amazon on Horseback is not only Tuaillon’s greatest achievement but also one of the most important German sculptures produced in the years around 1900. 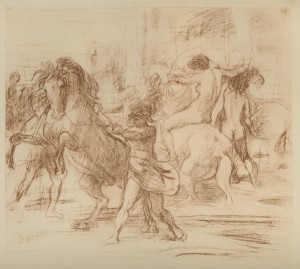 Tuaillon’s interest in the theme was aroused by his encounter in Rome with the painter Hans von Marées, who derived much of his inspiration from classical themes and in whose oeuvre the horse occupied an important place. The two men were introduced by their mutual friend the artist Artur Volkmann, who was a horse-lover. An Amazon on Horseback would seem to have been directly inspired by a study of horses by von Marées that was acquired by Tuaillon (Fig. 1).1 The exhibition staged in 1919 following Tuaillon’s death included four studies for An Amazon on Horseback, one of which is known from a reproduction (Fig. 2).2

As early as 1899, Tuaillon contacted Hugo von Tschudi, the Director of the Nationalgalerie in Berlin, to ask him for authorization to make modified casts of An Amazon on Horseback. However, it was not until 1903 that a slightly altered version in statuette format was cast by Hermann Noack in Berlin in an edition of five or six copies.3 Those statuettes became the property of the Berlin collector and patron Eduard Arnhold,4 who donated one of them to the Kunsthalle in Bremen in 1904 and a second to the Metropolitan Museum in New York in 19105. Further statuettes of the same height (84.5 cm) are to be found in the Neue Pinakothek in Munich, at Schloss Cecilienhof in Potsdam and in the gardens of Huis Doorn in the Netherlands.6 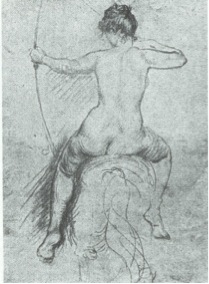 Fig. 2 Louis Tuaillon, Study for an Amazon, pencil on paper

From 1882 onwards Tuaillon worked as a pupil in the studio of Reinhold Begas (1831-1911). In 1885 he moved to Rome, where he remained until 1903, setting himself up as an independent artist during his stay. Thanks to Artur Volkmann (1851-1941) he became close to artists in the circle of Hans von Marées (1837-87) and Adolf von Hildebrand (1847-1921). On his return to Berlin, Tuaillon joined the Secession. He was soon a highly sought-after artist, receiving numerous public commissions for equestrian works. In 1906 he became a member of the Berlin Academy of Art and as from 1907 he headed a master studio for sculpture in the same institution, where his pupils included Georg Kolbe (1877-1947). Today Louis Tuaillon is seen as one of the forerunners of Modernism in Berlin at the turn of the twentieth century.

4 Eduard Arnhold (1849-1925), one of Germany’s leading art patrons during the German Reich and the Weimar Republic, founded and endowed the Villa Massimo, the German Academy in Rome. Together with Tuaillon and the architect Maximilian Zürcher he oversaw the building’s construction and the design of its gardens.