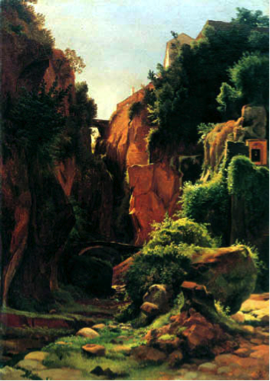 Louis Gurlitt executed this fine plein-air study in the first year of his first stay in Italy. This was from 1843 to 1847. Gurlitt had very recently married and the first stop on the couple’s honeymoon was Naples. Here they toured the city, made an ascent of Mount Vesuvius and visited Pompeii. They travelled on to Sorrento where Gurlitt found time to execute a number of landscape studies. He was as intensely attracted to the natural beauty of Sorrento as many a German artist before him. He set out to study the topography of the area with scientific precision and to render the changing effects of light in the landscape with great exactitude. Comparison with a larger version of the motif (Fig. 1) he executed somewhat later, probably in the same year – now held at the museum in Flensburg – underlines the spontaneous quality of the present study. Gurlitt’s brushwork is broad. Detail is subordinated to atmospheric effect and to colouristic contrasts between areas of light and shadow. In much of the composition the transparency of his brushwork allows the reddish ground to show through, creating delicate veils of fast-drying paint. This enabled him to work with great rapidity before the motif. In his memoirs he notes: I was overwhelmed by a form of nature that until then had been foreign to me. I invested all my efforts into grasping hold of it through industry and the most conscientious of studies. But I was burdened with uncertainty, ignorant of whether my works would bring me success sufficient to live on in this new land with my wife and most likely with children too.[1]