A landscape should not only transport us to a particular region, but also show the characteristics of that area and its nature. It should appeal to the sensitive viewer in a poetic manner; it should, as it were, inform him about a country’s natural environment, its building styles, its people and their customs — whether idyllic, or historical-melancholic — whatever they are and were.1 (Dahl in a letter to Lyder Sagen in 1841) 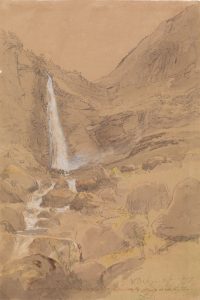 On his visit to Norway in the summer of 1826 Dahl spent an extended period on the scenic eastern shore of the Lusterfjord in southern Norway. He stayed at Ytre Kroken, a historic farming settlement dating back to medieval times. The farm was the ancestral home of Gerhard Munthe (1795-1876), an early co-director of the Nasjonalgalleriet (founded in 1837) in Christiania (now Oslo) who was to transform his house, the ‘Munthehuset’, into a meeting-place for artists. It was here that Dahl first met Thomas Fearnley, a fellow countryman who was later to be his pupil in Dresden. From August 8-13 they made an excursion to Feigum, Skjolden and Fortun. Dahl produced a large body of studies and drawings on the trip, working them up later in larger-format studio compositions on his return to Dresden. The present painting was executed in 1848 and is based on a pencil-and-wash drawing2 dated 8. August 1826 (Fig. 1). The drawing depicts the Feigumfossen waterfall. With a vertical drop of over 200 meters, the waterfall is one of the highest in Scandinavia. 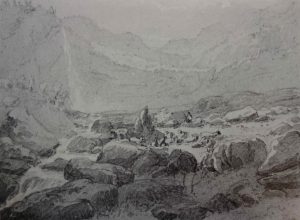 The minor part played by human beings in Dahl’s paintings is balanced out by their inestimable value to him as a measure of the vastness of the natural world. How small the figure of the goatherd appears in relation to the towering height of the waterfall and bleak surrounding rock formations. The almost unnoticed presence of the herdsman and his goats underscores the monumentality of the mountains and at the same time, offers a token of respect for lives governed by the unconquerable forces of nature.

Until recently the existence of this painting was only known through a Liber Veritatis drawing today in the collection of the Billedgalleri in Bergen (Fig. 2). The sheet formed part of Dahl’s Liber Veritatis, a drawn record of his paintings begun in the 1820s to document works he had parted with. He usually recorded the format of the painting and the name of its new owner.