The Bay of Naples with Mount Vesuvius, 1820

I have painted the view from Monte Coppolo [sic] – the one I began a few days ago for the Princess, intended for the Prince’s birthday.
(Johan Christian Dahl’s diary entry for 4-5 September 1820)2 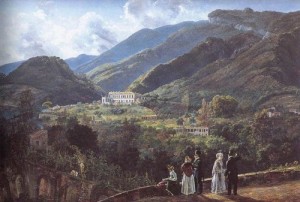 In May 1820, Dahl received a travel grant from the Danish Crown Prince, Christian Frederik (1786-1848) and an invitation to stay as his guest at the royal summer residence, the Villa Quisisana (Fig. 1) just south of Naples. The Villa overlooked the Bay of Naples near Castellammare and had been lent to the Danish royal family by Ferdinand IV of Naples. Dahl set off for Italy in June 1820, one day after his marriage to Emilie von Bloch. He arrived at the Villa Quisisana on 11 August 1820 after stops in Munich, Florence and Rome.

This painting was one of the first works Dahl completed on his arrival. It was commissioned by the Danish Princess to mark her husband’s birthday on 18 September. It depicts the view the royal couple enjoyed looking north from the terrace of the Villa towards the Bay of Naples. To add grandeur to his depiction of the landscape, Dahl selected an elevated vantage point on the ridge of Monte Coppola just behind the Villa. The towns of Castellammare, Pompeii and Torre del Greco can be made out on the Bay of Naples. Vesuvius is depicted at the right, its volcanic plume rising into the calm evening sky. The warm glow of the last rays of sun illuminates the cloud-scattered sky as dusk approaches.

Dahl executed a number of preliminary sketches3 sur le motif. He also made a large-format, less detailed preparatory study in oil. This was to remain in his possession until his death. It is now in the collection of the Nasjonalmuseet in Oslo.4

The present composition has many of the characteristics of a traditional veduta. This was almost certainly Dahl’s intention, given the conservative taste of his royal patron. But the qualities of the painting are not limited to the conventionally picturesque, as in a Grand Tour souvenir. His delineation of topographical detail is meticulous and his depiction of the effects of natural light masterly. This is evident in the delicate rendering of the diffuse haze over the bay and the warm glow of the evening sky. The painting shows a debt to the contemplative, atmospheric work of Caspar David Friedrich, whom Dahl had met in Dresden in 1818.5

Goethe noted: In such surroundings one cannot but become an artist.6 For Dahl, this was an formative and extremely productive period. In late October 1820, seeking escape from the constraints of formal court life, he took independent lodgings in a guest house owned by Christian Frederik in Pizzofalcone, then an elegant coastal area of Naples. This gave him the independence to travel to Pompeii and other sites on painting expeditions with Franz Ludwig Catel (1778-1856). He climbed Vesuvius three times. He began his return journey to Dresden from Rome on 27 July 1821.7

1 See Marie Lødrup Bang, Johan Christian Dahl 1788-1857: Life and Works, II, Oslo 1987, no. 226. Dahl produced two signed and dated versions of this view in 1820 (Bang 225 and 226), one of which bears an inscription identifying the painting as a view from Piedemonte [sic]. This version was to remain in Dahl’s possession. Bang believes that Reitzel confused the two versions in his description, since he gave the painting the same provenance and exhibition history as the present version (‘Copenhagen, 1826, no. 39?’).