We are grateful to Professor Christine Farese Sperken for examining the work. She has confirmed its authenticity.

A painting now in the collection of the Indianapolis Museum of Art titled La Strada di Brindisi [The Road to Brindisi] (Fig. 1) dates from the same period. It was shown at the Paris Salon in 1872 (listed as no. 1177). It depicts a barren, shadeless Apulian landscape in burning sunlight, and is rich in narrative detail – plants, animals, a horse-drawn coach and two travelers.

Coincidentally, the painter Marco De Gregorio actually depicted De Nittis at work on La Strada di Brindisi. This is, of course, of particular documentary interest and underlines the importance of De Nittis’s canvas.1 Like De Nittis, he was a member of the School of Resina, an informal group of painters working near Naples. The second study discussed here is an early preliminary study for La Strada di Brindisi, the 1872 painting now in Indianapolis. It focuses on a few sparingly indicated compositional elements, such as the flat white construction in the background – clearly identifiable in the finished painting – and on the tonal value of the clear, translucent blue of the sky, which was one of De Nittis’s major preoccupations at the time. His aim – as his friend Adriano Cecioni explained – was to produce an enamel-like translucency. This quality is also present in the study mentioned above, Paesaggio Vesuviano.One further detail: the imprint of a cat’s paw in the upper area of the image. This detail emphasizes the spontaneity of the study. De Nittis was a cat enthusiast. Edmond de Goncourt describes how De Nittis’s favorite cat would sometimes sit on his shoulder at mealtimes.2 It is likely that he left the study unsupervised for a moment while it was drying. 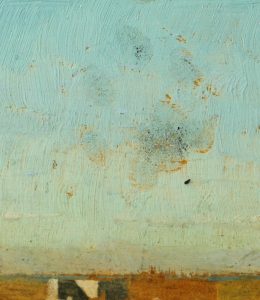 1 De Gregorio’s work is now in a private collection in Milan.