This composition appears as the most satisfyingly complete of the Gravelines drawings. Its sky bears the delicate lines and rubbings of Seurat’s late drawings, which here seem appropriate to the pervasive light of the flattened-out Channel coast. (Robert Herbert)[1]

This fine drawing was made by Georges Seurat en plein air on the quay of Gravelines, a small French seaport near the Belgian border. It is a study for the painting titled Le Chennal de Gravelines: Evening, today in the collection of the Museum of Modern Art, New York (Fig. 1). Three other drawings and one oil sketch related to this painting are recorded, the present study being the closest to the final composition.

In her entry on the drawing in the catalogue of the 1991 Seurat exhibition at the Indianapolis Museum of Art, Ellen W. Lee writes: One of the conté crayon drawings prefigures the left half of the finished canvas, as it shows the addition of two boats, one with sail and one without. The cloudy sky is hastily sketched with hatchings in criss-cross and chevron patterns that bear no particular resemblance to the striated sky of the canvas. While the Gravelines drawings are not characterized by the rich blacks and the sense of contrast that distinguish Seurat’s most evocative independent works on paper, this drawing does reveal his attention to tonal distinctions. The lamppost is the darkest element of the drawing, a role it maintains in the finished canvas. A curious element on the right side of the drawing is the subtle band of vertical lines that descends from a dark spot just below the far shore. It suggests that the artist was assessing the effect of a vertical addition to this area.[2] 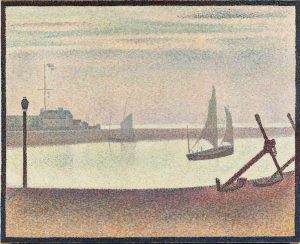 Gravelines harbor, situated on the river Aa, connects to the open sea via a narrow channel. In the seventeenth century, King Philip IV of Spain had two small fortifications constructed on either side of this channel. They were soon surrounded by small hamlets, Grand Fort Philippe on the west and Petit Fort Philippe on the east. Seurat made the drawing from a vantage point in Petit Fort Philippe looking across the channel towards a few outlying houses at Grand Fort and the open sea in the distance. He drew his inspiration from the alternating planes of land and water merging in the dusk. The absence of staffage reveals his intention to avoid anecdotal distraction and focus on the atmosphere and the light conditions.[3]

Seurat spent the summer of 1890 at Gravelines. The preliminary drawings and four paintings of the channel that he produced here were to be his last landscapes. They were shown at the exhibition of Les XX in Brussels in February 1891 and at the Salon des Indépendants in Paris in March 1891. The paintings were still on view when Seurat died, at the age of only thirty-one, on 30 March 1891.[4] After his early death this drawing passed into the hands of his brother-in-law, Léon Appert.