Waldmüller turned increasingly to genre subjects in the 1850s. Early twentieth-century art historians tended to dismiss his genre paintings as examples of Biedermeier idyllism. Today, however, their remarkably realistic qualities are the chief focus of interest. In this painting a stream of brilliant direct light is used to model the figures. The flesh tones of the mother are noticeably darker than those of the girl and baby. There is dirt on the soles of the boy’s bare feet. The drapery and clothing are executed in rich colour with touches of clearly articulated highlighting. The handling of textures is masterly and the materials finely differentiated. The still-life objects depicted at the left are in no way staged but seem entirely integral to the scene. Waldmüller pays particular attention to the depiction of the children. He was especially drawn to children deprived of educational opportunities but whose naturalness and lack of sophistication were unfeigned. 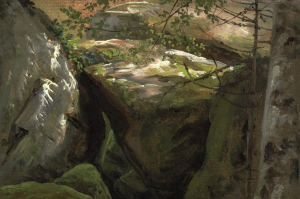 His determination to achieve realism is noticeably more pronounced in the more sombre genre scenes he was producing at the time. A good example is the painting titled Erschöpfte Kraft[1] (Fig. 1) executed in 1854. A mother lies prostrate beside her child’s cradle, her strength spent. Here, there is no glossing over the facts but a very precise depiction of the hardships of peasant life. Transient moments – both positive and negative – are frequent in Waldmüller’s late oeuvre.

As Waldmüller’s work became better known in the late 1850s he began to produce versions and variants of many of his genre paintings. This is evidence of the popularity of his work not only in Vienna but abroad. The first version dates from 1851. The present painting is Waldmüller’s third version and probably the one best preserved. Numerous others with frequent small variations were to follow. [2]

[1] Rupert Feuchtmüller, Ferdinand Georg Waldmüller 1793-1865, Leben – Schriften – Werke, Vienna and Munich 1996, p. 506, no. 884. [2] Feuchtmüller, op. cit., 1996, p. 222. Bruno Grimschitz’s book on Waldmüller (Ferdinand Georg Waldmüller, Salzburg 1957) has caused considerable confusion with regard to the various versions of Mutterglück. In his book, the provenances of the second, third and fourth versions of the painting were confused. The incorrect details were published unaltered in the catalogue of the 1978 Schweinfurt exhibition. However, in Feuchtmüller’s 1996 catalogue raisonné (op. cit.) provenance details were corrected.