‘Boy with a Stable Lantern'
A rediscovered self-portrait by Ferdinand Georg Waldmüller, 1825

We wish to thank Dr Sabine Grabner of the Österreichische Galerie Belvedere, Vienna, for her research into the present painting, which she has been able to consult in the original. Her findings, summarised here, will soon be published in full elsewhere.

Paintings by earlier artists frequently inspired works by Ferdinand Georg Waldmüller. It is thus scarcely surprising that this indoor image should bring to mind the art of Dutch Caravaggisti of the seventeenth century. Yet it also testifies to an urge to explore reality on the part of a painter who never ceased to investigate light in its various ephemeral manifestations, whether as sunlight or candlelight. The source of the light in the present painting is not directly visible, hidden behind the lantern frame. On the one hand, this shields the viewer from the light; on the other, it generates a number of optical effects - the reflection of the flame in the glass, for example, or the variegated shadows, which rescue even a tobacco pouch from obscurity and render it attractive. Also closely observed are the way in which the cracked glass of the lantern catches the light, the reflection of the pipe bowl in the glass and the colour of the lines of the hand as it shades the candlelight. The painter's chief concern, however, was with the figure. Here, too, light and shade model the forms, sculpting a youthful face above the white shirt, flanked by long, fair hair and topped by a fur cap. The light of the candle acquires a life of its own as it rises steeply to strike the face. Distorting the features, it causes the eyebrows to cast strong shadows and the eyes to appear exaggeratedly large, with greatly dilated pupils.

An inkling of who the sitter might be emerges when the distortions generated by the light are disregarded in an attempt to envisage the young man's actual physiognomy. Bearing in mind that observations of the kind captured in the painting are best made with reference to oneself, it becomes feasible to recognise the image as a self-portrait of the 32-year-old artist.[2] Direct comparison with Waldmüller's authenticated self-portraits is made difficult by the differing viewpoints in each case. I therefore enlisted the help of the Sweden-based biologist Martin Braun. One focus of Braun's work has been the statistical documentation of facial features with a view to identifying people from the past, among them Wolfgang Amadeus Mozart.[3] Comparing the 'boy' with the lantern with the three self-portraits by Waldmüller reproduced here (figs. 2-4), Braun came to the conclusion that the present painting must represent the artist.[4]

Our painting is a smaller version of a picture dating from 1824, also executed on wood, that has been in the collection of the Kunsthalle, Hamburg, since 1901 (Feuchtmüller no. 154; fig. 1).[5] Apart from some minor details, such as the eyes and forehead, which are less strongly emphasised in the Hamburg version, the two images are identical. Both are signed and dated on the floor of the lantern. There is no reason to doubt their autograph character. 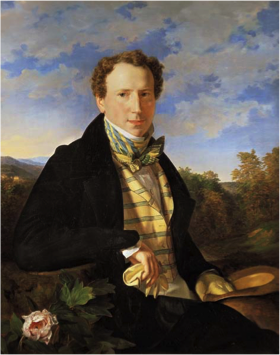 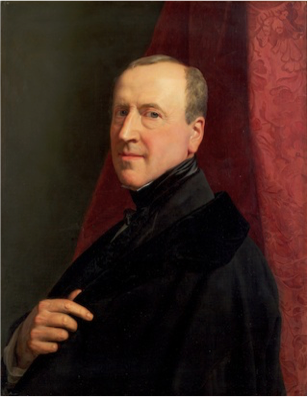 A further version of the painting exists, its dimensions virtually identical with those of the Hamburg picture, but unsigned and less fine in quality than the other two works.[6] This third painting, its present whereabouts unknown, was included in an exhibition in Vienna in 1993[7] and is listed as no. 155 in Rupert Feuchtmüller's catalogue raisonné.

The paths of these three pictures crossed several times in the last century. This resulted in confusion regarding their respective dimensions, locations and provenance. Theodor von Frimmel saw the present painting in the collection of Professor Gierster in 1904 and published it that year.[8] Arthur Roessler published a reproduction of it in 1907, citing the correct dimensions, date and signature, but giving the location as the Hamburg Kunsthalle, doubtless unaware that two versions existed, that in Hamburg, dated 1824, and the present one, dated 1825.[9] When Bruno Grimschitz was compiling his catalogue raisonné of Waldmüller's work in the 1950s,[10] he found that the file on the Hamburg painting in the Waldmüller Archive in Vienna,[11] perhaps drawing on Roessler, listed the dimensions and date of the present version. Noticing the error, he struck out this information, substituted the correct dimensions and date, and included them in his entry for the Hamburg picture (no. 137). The present, smaller version, though familiar to scholars in the early twentieth century, had thus obviously disappeared from view after the Second World War: Grimschitz simply thought that his predecessors had made a mistake and had no idea that that the present painting existed. Henceforth it did not figure in the literature on Waldmüller, and Grimschitz included only the third, inferior version[12] in his catalogue (as no. 153). This he described, incorrectly, as bearing the inscription 'Waldmüller 1825'. Feuchtmüller, in his catalogue raisonné of 1996, noted Grimschitz's error, but listed Malvine Gierster as a previous owner.[13] This doubtless represented a confusion of the third version's provenance with that of the present work.

Since the present painting is an authenticated work by Ferdinand Georg Waldmüller, it will be included as no. 154a in the catalogue of the artist's oeuvre maintained by the Waldmüller Archive. 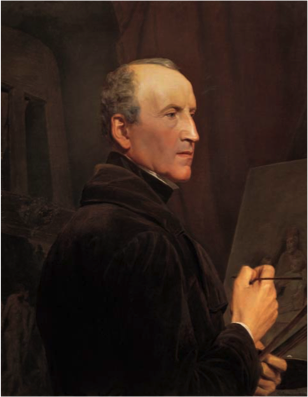 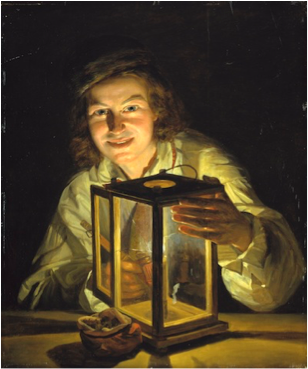