A Pilgrim Boy with Guardian Angel in an Italian Landscape, Rome 1825

After completing his studies in theology in Halle in 1808 Adolf Senff1 turned to his true interest – painting. When the Dresden painter Gerhard von Kügelgen appointed the young Senff as private tutor to his sons in 1809, Senff was rewarded with tuition in drawing and painting in exchange for his services. This was his first contact with Dresden Romanticism. As a member of the Freikorps der Markaner Jäger, allied with the Prussian Army, he witnessed the end of Napoleonic rule and entry of the Allies into Paris in 1815. He came into an inheritance in 1816 and this enabled him to travel to Rome via Dresden, Prague, Vienna and Florence. On his arrival he moved into lodgings in the celebrated ‘Casa Buti’.

He remained in Rome until 1848, where he struck up friendships with the painter Franz Ludwig Catel (1778-1856) and the sculptors Berthel Thorvaldsen (1770-1844) and Daniel Christian Rauch (1777-1857). Senff made four portraits of Thorvaldsen and he also brought two of Thorvaldsen’s best-known allegorical reliefs, Morning and Night, to canvas. One of the canvases, titled Night and Her Children, Death and Sleep, executed in 1822, is now held in the Staatliche Museen zu Berlin (Fig. 1). Senff was almost certainly also in close contact with the ‘Nazarene’ painters. He began by making copies after the Old Masters, particularly Raphael, and their influence was to make itself felt in his own compositions. 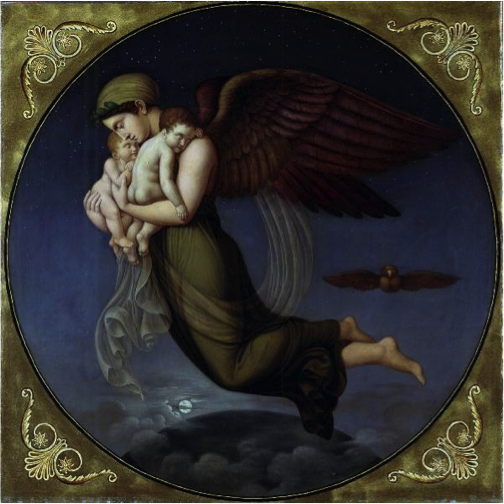 The present painting is greatly indebted to Raphael. With its simplicity and hardness of outline it shows an engagement with the work of the ‘Deutsch-Römer’, whose aim was to regenerate painting through the study of the Italian Renaissance. Senff’s meticulous execution and the richness of his palette are remarkable. Around 1825 he developed an intensive and enduring preoccupation with the depiction of plants, particularly flowers – as is clear in the present painting. The variety and botanical accuracy of the flora in the present oil are an early pointer to his later career. The mussels, the bundle at the boy’s side, the pilgrim’s staff, the guardian angel and the steep winding path in the background could be seen to symbolize man’s pilgrimage through life and a metaphorical journey, or search for
spiritual truth, safe in God’s hands.