Bruno Liljefors is known primarily for his animal subjects not only in Sweden but also in Europe and the United States, where he exhibited early in his career. He was an avid hunter and lived in close contact with nature. Predators – a fox chasing a hare, sea eagles and hawks – were his preferred subjects. He was a good observer and depicted wild animals in their natural habitat – his objective approach contrasted strongly with the frequent sentimentality of many animal painters of the era.

Unusually for Liljefors, the present painting is a pure landscape with no sign of animal life. It is no coincidence perhaps that he gave it to his friend and colleague Johan Åkerlund who specialized in landscape painting. In the summer of 1884 Liljefors moved to Kvarnbo, a few kilometers from Uppsala, where he was to live and work until 1894. It was here that the painting was executed. A striking feature of the work is the extremely high horizon line with its contre-jour emphasis on the shapes of two houses sharply contrasting with the brightness of the sky. But the main subject of the painting is the meadow, which Liljefors represents by addressing the problems associated with two forms of visual perception – a close-up view and a distant view. The same challenge was tackled by the Norwegian artist Harald Sohlberg (Fig. 1). Liljefors uses brushwork as a perspectival tool and gradually blends his very precise study of foreground detail – a confusion of dry grasses interspersed with varieties of weed – into a carpet of pointillistic brushstrokes as the landscape recedes. His rapid, robust handling of paint together with the originality of the composition lend it remarkable vibrancy and vigor – the hallmark of his style from 1884 through the early 1890s.

Liljefors began his training at the Royal Swedish Academy of Art in Stockholm in 1879. While at the Academy he struck up a lasting friendship with the painter Anders Zorn (1860-1920). He broke off his studies in 1882 to travel first to Denmark and then Germany. In Düsseldorf he briefly received tuition from the animal painter Carl Friedrich Deiker (1836-1892). Later in 1882 he traveled to the village of Gréz-sur-Loing near Fontainebleau. Here, a group of Scandinavian artists had settled and an international colony of artists was in the process of forming. Among them was the Swedish artist Carl Larsson (1853-1919). The visit had a significant impact on Liljefors’s artistic development and opened up a range of new artistic impulses. He developed an interest in French Realist painting and engaged with modern plein-air practices. His discovery of Japonisme, particularly Japanese woodblock prints and their unique approach to perspective, influenced his early work.2 He returned to Sweden in the spring of 1883 by way of Upper Bavaria, Venice, Rome, Naples and Paris. 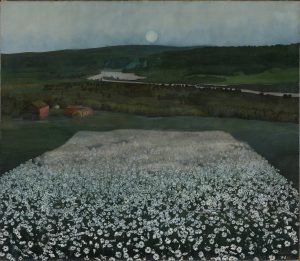 On his return to Sweden he joined the artists’ group ‘Opponenterna’ (the Opponents), an association of young artists and art students who in March 1885 vehemently spoke out against the academic approach to painting. They jettisoned academic teaching and campaigned for reform. The group’s first exhibition, held on September 15, 1885 in Stockholm, took a strong public stand against academic painting and marked a turning point in the history of Swedish art. Liljefors made his breakthrough at the exhibition with a large-format painting titled Hound and Fox (Fig. 1) which was acquired by the National museum in Stockholm. The failure of ‘Opponenterna’ to achieve the desired reform led to the founding in 1886 of a new artists’ association, the ‘Konstnärsförbundet’, which remained active until its dissolution in 1920.3