When this landscape was executed in the late summer of 1911 Wilhelm Trübner was staying as a guest at a property on the outskirts of Starnberg known as the Villa Goes. Previously known as the Villa Holz (Fig. 1), the villa was built in 1864 by Hermann Holz, a court photographer and portrait painter. Trübner’s host was Friedrich Goes, who had moved into the villa in 1874. The property was acquired by the Munich Yacht Club and is still in the Club’s ownership.[1] 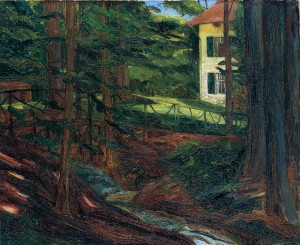 In the summer months of the years 1907 to 1910 Trübner stayed in the village of Niederpöcking. This is only a short distance from the Villa Goes. It was here, in 1907, that he first painted the view depicted in the present work. It is a view looking east from Niederpöcking across Lake Starnberg towards the village of Berg. The title of this first version is Terrace on the Shores of Lake Starnberg (Rohrandt G 689). The present view, executed four years later, shows a distant outline of hills on the far shore of the lake with the distinctive silhouette of the pilgrimage church of Maria Himmelfahrt in Aufkirchen. A raised rose bed is depicted at the water’s edge in the middle ground.

At this stage in his career Trübner had adopted the serial approach to the selection of motifs favoured by the French Impressionists. Rohrandt notes: The development, repetition and variation of a specific painterly form [... came to be] an overriding working principle in Trübner’s late work.[2] In a letter of August 1917 to the art historian Dr. Josef Beringer, Trübner mentions that he produced several versions and a number of variations of the same view across Lake Starnberg, all of them with the raised rose bed.[3]

A series of strong horizontal accents dominates the landscape. In the foreground, a path – depicted in broad, flat brushstrokes – winds across an expanse of lawn. The path, shore and lake, the line of hills on the distant eastern bank and the cloud movements above them are defining elements running parallel to the picture plane in successive intervals. The landscape is closely related to the work of Trübner’s contemporary Ferdinand Hodler (1853-1918) whose landscapes meld realism with a starker form of abstraction and with symbolist elements. Common to both artists is the choice of an open, unrestricted landscape view free of staffage and lateral boundaries. In the present landscape all that accentuates the empty foreground is the flower bed to the right of the image. The palette is dominated by shades of blue and green. Trübner uses broad, vigorous brushstrokes to articulate the expanse of lawn, the glint of light and the reflection of cloud on the surface of the water. Writing about the painting in 1917, Beringer enthused: A painting of an untroubled type, perfectly depicted with creative sensibility and true feeling for nature, encapsulating a simple (colouristic, thematic and technical) formula.[4]

Trübner’s painting titled View across Lake Starnberg is a remarkable example of his late work. It is characterized by expressive brushwork and an attempt to achieve simplification and formal clarity. This marks him out as a pioneer of German twentieth-century art despite the fact that his conservativism was in conflict with contemporary moves to reform art education.[5]

Anselm Feuerbach was chiefly responsible for Trübner’s decision not to take over his father’s goldsmith workshop. But instead, he enrolled as a student of painting at the Karlsruhe Academy in 1867. He moved to Munich a year later and in about 1870 came into regular contact with Wilhelm Leibl and his circle. Around this time he abandoned his studies at the Academy. He worked for a short time with Carl Schuch, Albert Lang and Wilhelm Hinrich and went on to share a studio with Hans Thoma. He settled in Munich in 1875. His association with Lovis Corinth, Max Slevogt and Max Liebermann motivated him to join the Munich Secession in 1894. However he was only briefly a member, leaving a year later to join the Freie Vereinigung München. He moved to Frankfurt in 1896 when he was appointed professor at the Städel School. He moved on to Karlsruhe in 1903 where he was professor until 1917. He was director of the Karlsruhe Academy in the years 1904 to 1910.[6]